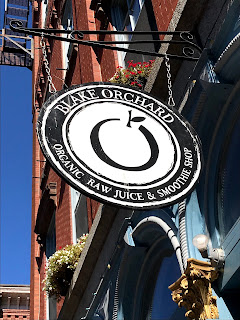 One of the downsides to travelling on cruise ships frequently is that you’re likely to dismiss an entire city based on your very limited window of experience. If a city isn’t screamingly unique right off the bat, or if the last city was amazeballs and this city is noticeably-less-amazeballs, it’s easy to check out mentally. In my head, I briefly wrote off Portland. Probably because we started with a long walk through all the rubby-dub sections of town -- areas where heavy construction had been started but them seemingly abandoned. Sarah needed to find a TD Bank and then she wanted to visit a Trader Joes, and this dictated the path we took. I remember checking the time on my phone thinking we still have seven hours to spend in this damn port! But then we took a Lyft back to our ship, dropped off the 15 pumpkin-spiced somethings we bought at Trader Joes, and effectively rebooted our visit to Portland from there.

Sarah arranged a foodie tour for us. There were I think 12 of us on the tour in total. Our guide was Dennis (from away), and he was a well-informed but still very down-to-earth guy. Imagine if your chill, slightly overweight gym teacher decided to become a tour guide: that's Dennis. He started the tour with a talk about how Portland is a very entrepreneur-friendly city; how in the downtown core you’ll find very few chains. Starbucks is the one major exception, and he said that one day before the first Starbucks opened in town, someone threw a brick through the window. (Someone on the tour: “Oh no! Did they catch you?”) Our first official stop was Maine’s Pantry, where we sampled a local soda named Moxie. It tastes both medicinal and unremarkable at the same time, and if that sounds like a recommendation then there’s something wrong with you. Apparently there are local Moxie Festivals with Moxie-chugging competitions. And I’m not sure if I believe this fact, we’re told that moxie the attribute took its name from Moxie the drink, and not the other way around. Dennis also brought in samples from a place called The Holy Donut, which makes potato-based donuts. Totally solid, and more or less indistinguishable from the regular kind.

Next, we stopped briefly into Blake Orchard, which is an organic smoothie place. I do not recall all of the items in our smoothie except for the large chunks of bee pollen on top. Everything they serve is cold-pressed rather than blended – basically squashed into smoothie form, as apparently this process retains more vitamins and minerals. I suggest to our tour guide that I could really go 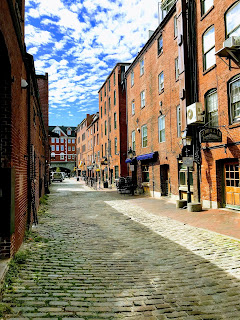 for some cold-pressed lobster, but the joke does not land at all. David’s Opus Ten is next, which is a more exclusive room within a larger restaurant. We have a decent clam chowder, but this is accompanied by the best shrimp I’ve had in my entire life (I know I’ve used that phrase more than once on this trip but I’ve meant it literally every time). It was massive, blackened, Cajun-flavoured and just *kisses fingertips*. They also randomly served pizza, which was good but paled in comparison. We walked about 10 steps next door to the Public Market House to sample sushi from a place called Mr. Tuna. The sushi was super unremarkable, but the building itself is very cool. It’s a place where food trucks looking to scale up can get indoor counter space – which allows multiple business to operate under one roof using a common kitchen (sharing the cost of both real estate and health inspections). While we’re there, Dennis gives us some detail on the lobster industry – how there are a limited number of lobstermen licenses, how you denote your traps by the colour of your buoys. Most interesting are the rules in place to sustain the lobster population. Lobstermen must throw back any females who have laid eggs in the past (spottable by a notch in their tail), and they must notch and release females who currently have eggs. They also have to throw back any lobsters that are too big or too small (there are specific measurements between eye stalk and tail). Smart work done here.

Our second-to-last stop is a place called Gritty’s – which is eight times cleaner than the name would suggest. We have middle-of-the-road lobster rolls and beer (water for some), and it’s a good time. After we walked out (at least I think it was at this point), Dennis points out the other nearby restaurants we’ve visited, and how we’ve basically circled and figure-eighted around the same few blocks. Sarah knew this, of course. She asked if I’d realized it too. My response: “I am following a man in a hat. I know where he is. I don’t know where I am.” Our final stop on the foodie tour was Dean’s Sweets where we sampled truffles, which were… totally fine. Sorry truffles: it’s not you, it’s me. It might just be the premium that they come with, but I always expect to be absolutely knocked on my ass when I try a truffle, and I remain completely unmoved every single time.