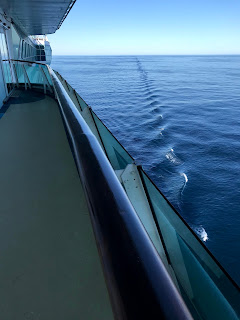 Our first day at sea. We sleep in a little then try the Windjammer for breakfast and it’s a horrible mistake: just rammed. We console ourselves with nice coffees at the Diamond lounge. A little later in the day, the climbing wall opens. I go up twice and it is hard. The wall slants steadily outward and there’s fewer firm handholds than the last ship. But I make it to the top both times so hurray for me. The Flowrider is open again, but this time it’s surfing. There’s an older Australian couple on the trip (either in their late fifties or very early sixties) and they’re just crushing it while surfing. They take turns doing about eight runs a piece, looking like absolute heroes, then they notice me and apologize for hogging the ride, but I tell them not to worry because I’m totally divided about trying it. I watch for probably 20 more minutes before working up the courage to try. I know I’ll suck and my goal going in is to last four seconds by cruise end. I get to maybe three and a half seconds by my fifth try, and that’s good enough for now. Also: I don’t end up naked even once. Winning.

At dinner, we go to the main dining room and get seated at a table with six older New Yorkers, all from Long Island. It’s just like our honeymoon. They’re all very nice and very welcoming, and we have a great meal. Sarah continues her on-vacation role as Canadian cultural ambassador, sharing all kinds of knowledge about our upcoming ports and our country in general. Question she is often asked: do you work for Canadian tourism? Some other lady (I forget who, but it was sometime after this) suggests she should have a job going from ship to ship and just dropping knowledge on other cruisers. Dear Royal Caribbean: I think Sarah would be open to an arrangement of this kind.

After dinner, we join our table mates at trivia, and we lose by maybe a point, but Sarah gets a chance to show off her General Knowledge Of All Things. Later in the evening, getting a late night coffee in the Diamond lounge, we end up chatting with another guy from New York named Cecil. Super interesting dude – retired city bus driver. We talked about parenting, marriage, divorce, race relations, American politics, 9-11. It’s a fascinating talk, and surprisingly non-divisive despite the topics covered, but after about five hours of talking with new people, I was absolutely peopled out. I had a people hangover that lasted well into the next day.