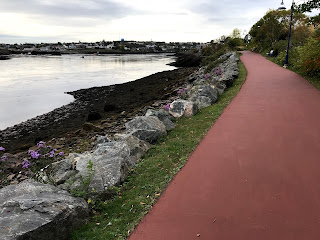 In Saint John, our plan is to follow the river walk and reach the Reversing Falls. This is an area where the Saint John river meets the Bay of Fundy. As a result of the difference in elevation (up to 50 feet depending on the level of the tide), the resulting effect can include whirlpools and crashing waves. The name given for this phenomenon is the Tidal Bore. It’s a hike and a half to get there, which is okay because I’ve got more than my share of meals to walk off. Once upon a when, the walk was just industrial wasteland, but there’s now a well-maintained brick path with various playgrounds, art installations, and informational signage along the way. While we take in relatively little of the informational tidbits along the route, we catch a shit ton of Pokemon, so at least there’s that. After about forty minutes of walking, we make it to the Reversing Falls. We get there relatively early in the day, so the water isn’t doing crazy things, but spectator-wise, the area is also fairly quiet so we can check things out from various angles and take all the pictures we want. After this, we cross over to nearby Wolastoq Park which has chainsaw-made statues of various people important to New Brunswick’s history. Off the top of my head, I can name Samuel de Champlain and Benedict Arnold (who apparently settled here after Benedict Arnold-ing his countrymen in the US). The rest have left my mind and the Wolastoq Park website is completly devoid of specifics or important details of any kind, so maybe Sarah can fill in the gaps.

After walking back to town, we had lunch at Big Tide Brewing Company. Sarah had a blueberry cream ale that she fell in love with. I had a diet coke that, at best, I’d 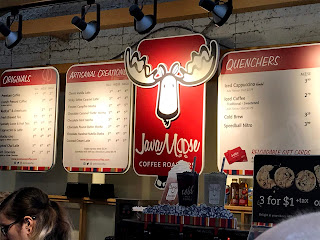 like to just be friends with. We walked around a little more, wandered through a covered market and bought lattes at a local chain called Java Moose. Then walking outside, a reporter from the CBC asked us who we thought would win the upcoming election. Sarah gave an intelligent, well-stated, but resigned response. I just made a guttural fear noise and backed away from the camera. Unlikely that my old mug made it to air, but anyone watching the Saint John evening news on October 1st probably saw my pretty wife on their screen.

It’s been a good cruise to date, but people around us seem to be more full of complaints than your average cruise. Lots of bellyaching about service. My single favourite comment was when someone pulled their server aside after dinner and said, “Tell the chef this was terrible.” That’s right – guy who’s been breaking his back to fulfill our every dining whim – march over to kitchen and tell the head chef who just supervised dinner for like 1,500 people that he did a really shitty job.