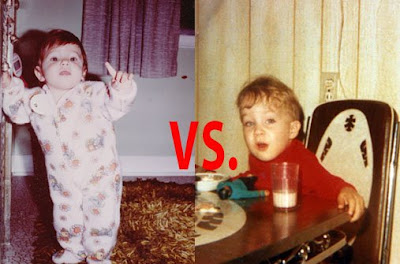 I've got a twenty dollar bet going with Sarah. The last time I made one of these, it was about whether Humpy would turn out to be a boy or a girl. I chose boy, not because I really believed it but just to be contrary. Regardless, I won myself a cool twenty dollars. This new bet is about who Humpy's going to look like, me or Sarah.

There's strong argument either way. One of the first things I noticed when I started dating Sarah was that everyone on her mom's side looks alike. They call it The Demon Panetta Gene. Sarah, her mom, her Aunt Pat, and most of her Aunt Pat's kids look alike. Her Uncle Sergio's kids look more like Sergio than Sally. And her Mom's siblings themselves look either like their father or like members of his family. When Sarah visited her grandfather's family in Italy, she was taken aback by all the resemblances. She would find herself thinking, "That lady has the exact same legs as me!"

And the McLeans: same thing. My dad only had brothers, they had only sons, and the sons look like their fathers. With some exceptions. Like my brother. Who looks more like my mom. But he was adopted. (wuh?)

Up until recently, I'd figured this kid would have the hair and eyes of his mom. But then I was flipping through old pictures last week and I saw a photo of six month-old me, propped up in a chair and smiling a gummy smile.. and I felt this sudden, strange certainty that this kid was gonna be my clone. It's been at least a week now, and the feeling's still there. Sarah disagrees. "Hells no!" she says. "The Demon Panetta Gene will prevail!" (Maybe she doesn't use those words, but the intent was the same.)

So wish me luck. That would make me right two times in a row, and in the course of this marraige that's pretty much unprecedented.

Anonymous said…
Either way he's going to be one cute kid!

Anonymous said…
@Beth - He spent it all on hats.

@Dave - I hope you win, only because it seems so important to you. ;)

@Sarah - How much would it take to rename that to The Demon Pancetta Gene? Dave has $20 he can give you. ;)

Anonymous said…
I don't care who he looks like. He shall be named Humpy!
1:39 pm

Anonymous said…
Here's my prediction: he'll start out looking like Sarah, but in a few months he start looking like Dave. At about the 1.5 year mark, he'll look a little like both of you.

Dave said…
Olivia: When I heard you call me that on the answering machine, I thought you were calling me Chunky Wade, and I was like "Dude, my name's not Wade. And the other part, while true, is kinda mean."
8:33 am

Anonymous said…
Apparently now she calls you "Uncle Brave"
11:21 am