July 27, 2008
Sunday was our last full day in the city. After breakfast, we all met up at the Georgia Aquarium which is right next door to World of Coke… and also happens to be the world’s largest aquarium (or so the website says, and this may be a good tim 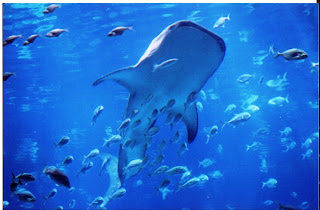 e to mention that for every website I’ve checked out related to these posts, there always seems to be a claim that that particular attraction is the biggest of its kind. The biggest cast iron statue!! The spoutiest water spout!!! Let’s just say I’m having my doubts at this point.) That said, the Georgia Aquarium is very cool. For a lot of reasons.
1. They have a petting zoo of sorts. There are areas where you can pet (with two fingers only!) rays, small sharks, starfish, and (no way in hell am I touching that) shrimp.
2. There’s a huge sea lion tank, and the sea lions are t

otally OCD. In one corner, there’s a ledge and a door where the trainers come out with food. The sea lions would basically swim around for twenty seconds, then hop up on the ledge and nose around the door to see if food had arrived, then swim for twenty seconds, then come back to the ledge, and repeat, and repeat, and repeat. The best part was that this continued even after they’d been fed.
3. The aquarium has the world’s only whale sharks in captivity. Whale sharks are the only filter feeding variety of shark. There’s been outcry over their being kept in captivity in the first place, but there’s apparently so little known about them that this allows greater study of the species (so we were told by Jack’s friend Jim who works at the Tennessee Aquarium).
Otherwise, there were sea dragons, and otters, and turtles (oh my!), and a dozen dozen other fish. The only other one I’ll mention by name is the humphead wrasse. Awesome for being ugly. Awesomer for having the name ‘humphead.’ That’s since become an endearment in our household. We’re calling each other humphead, we’re calling the cats humphead, and I'll probably call you humphead next time we speak.

Red Steph and her posse—all having to work at 6am the next morning and with a three-hour drive ahead of them—said goodbye at this point. The rest of us went out for some lunch. We stopped by a Krispy Kreme (where being all the way from Canada scored us another hat), and I had a delicious cream (or kreme) filled donut. We also reconfirmed that Krispy Kreme serves terrible coffee (it tastes like repugnance). After this, we met up with Jack and Steph’s friend Erica at Mary Mac’s Tea Room. Mary Mac’s is just about as downhome a restaurant as you’re bound to visit. You can have country-fried steak, baked chicken with cornbread dressing, and sides of fried okra, sweet potato souffle with marshmallow topping, collard greens & crackling, and hoppin’ john. During our meal, the owner came over to make sure the country-fried steak didn’t taste like pot roast (between you and me: it did), and then she went around the table scratching everyone’s back. You don’t get that kind of service at Kelsey’s, is all I’m saying.

We said goodbye to Erica and went back to the hotel to hang out and talk for a while. Then, when it was getting closer to night, we drove over to s 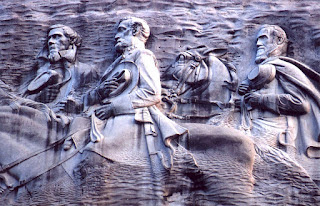 ee the Stone Mountain Laser Show. Stone Mountain is about a half hour’s drive from downtown Atlanta. It’s a state park built around a granite mountain (and in true form, the website assures me that it’s the “world’s largest piece of exposed granite.”) It’s also a site of some contention, because carved into the side of the mountain are three Confederate heroes: Stonewall Jackson, Robert E. Lee, and Jefferson Davis. The issue is not just that it’s a tribute to the Confederacy, but also that it was—at least historically—a site of KKK influence. I don’t note this as a condemnation of the place, but just to acknowledge the situation. As it finally got dark, everyone around had various glowy devices, swords, necklaces, etc. Georgia Steph bought us all some of those flexible glowy sticks—which we turned into headbands and bracelets and such. And then the show started, and it was a lot of fun. There was a sequence paying tribute to local sports teams, another one themed to “Devil Went Down To Georgia” that was especially good, and there was also a section that acknowledged the carved heroes and the civil war. Which wasn’t remotely contentious. The general message at the end was that the states became stronger and better 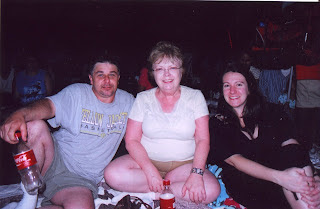 after the unification of North and South. To close, the finale was a general tribute to America, which was to be expected, but the real surprise was that they played all of the verses of the Star Spangled Banner. Did you know the full version is actually four times as long as the one you're used to hearing? Because Sarah and I gave this wtf—are they making this up?!? look to each other. But, well, you learn something new every day.

And that’s it. We said our goodbyes, thanked Jack and Steph for a fantastic time, went back to the hotel, and headed home the next day.

One last thing before I forget. On the drive home from the laser show, we removed our glowy apparel and left it laying on the floor and around the back seat. When we got back to the hotel, the valet took my keys, glanced into the car and said (with all seriousness) “Are you guys coming back from a rave?”

Anonymous said…
Hey Humphead, I got to pet a ray at the Shark Reef Aquarium at Mandalay Bay the last time I was in Vegas, but I totally did not get to pet a shark. I'm uber jealous of your shark petting ways!
9:46 pm

Anonymous said…
Sharks are very dense when you touch them. Rays (and I had touched them in Monterrey as a kid) are SLIMY AS ALL GET OUT. YUCK!

I missed out on the touching of anemonies, though.
10:46 pm