January 29, 2007
I went cross-country skiing yesterday for the first time in about two years. Briefly summarized: I suck. Less briefly…

We were out at an NCC trail in Kanata (the name of which I forgot three seconds after it was told to me), and it was a perfect day for it. The cast included Dave—your friend and humble narrator—Isha, and Cathy, with Sarah there in spirit (but in body, felled by sickness and sacking out at home). The path was a more-or-less flat 10K, and well groomed except for the last kilometer. From start to finish, I’d say we saw twenty people, which isn’t bad at all for an hour’s worth of skiing.

To be honest, I really enjoyed myself for the first fifteen minutes. Experiences like this make me get winter sports. It’s actually worth putting on your nine layers, and dropping all that cash for your skis or skates or snowshoes or sled-dog team. And cold weather endorphins feel strange and interesting to this old man’s body.

Now then, what didn’t I enjoy? Mostly the falling. Thirty seconds of falling and dragging yourself back up again is more exhausting then ten minutes of consecutive skiing. Don’t believe me? Try it. Make sure you fall straight backwards though, and pinwheel your arms on the way down for maximum effect. I bailed about nine times, with greater frequency as the trail went on. The best one was probably three hundred meters from the end. I was trying to pole my way up a steep hill, when I lost my balance and fell. Which wasn’t so bad. Then I got up, started sliding backwards, decided to get myself pointing sideways so I’d at least be able to stand still, and just as Cathy was saying, “If you angle your skis outward…” I did a face plant. Then, exhausted, I crawled up the hill on my hands and knees.

Actually, I can take the falls and all the shame that that entails; it isn’t a big deal. My biggest issue is that I can’t glide. Both times out, I’ve felt that I was working five times harder than the people I was with. The first time, in Tremblant, this was evidenced by Sarah singing out “I feel like I’m flying!” as I drag-assed behind her. This time, it was Isha floating by on the path beside me shouting, “Glide, sucker, GLIDE!” as I muscled my way along, weeping. It turns out that what I’m really doing is just walking. With two useless planks strapped to my boots.

There’s hope, though. We’re signed up for a weekend of skiing lessons starting this Friday. I’m confident this will beat most of the bad habits out of me. I want to enjoy this. I think I can. I just have to suck a lot less.

To close, here’s a picture of me shortly after the mighty face plant. (Special thanks to I-Tan Photography) 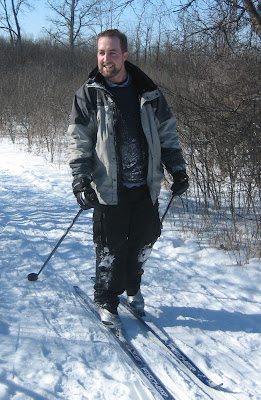 Anonymous said…
You might want to wear the skis so the binding is attached to your feet, rather than the other way around.

I found this helped me immensely.

If you don't want to be my friend anymore, I understand.

Jay said…
You hardly look close to death at all.

I like the skiing part alright, it's the screaming muscles 4 hours later that always does me in.
5:18 am

Isha said…
The name of the trail? Shirley's Bay.

It might hurt you to know this, but that trail is actually only 4 km (although on your first ski of the season it feels like 10.)

More importantly, though, you were such a trooper - you never let your struggle show (except, obviously, when falling.)
9:06 am

Dave said…
Thaaaaaanks. Make me look like a chump, why don't ya?

Actually, even when I was typing in that fake distance, I thought to myself, "I truly have no idea how long that trail was. The number I'm chosing is entirely arbitrary."
12:06 pm

Anonymous said…
You shut up.

Way to go, Isha! First for the "Glide! Sucker, glide!", then for cutting the distance down by more than half!

Anonymous said…
DAVE you are a skiing machine! I am proud. Next skiing picture...more sex. (= Work the snow on the belly more...you can do it!
9:15 pm