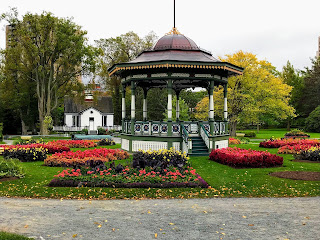 Day six of the cruise is Halifax, and we make no plans other than to see frieeeeeeends! I’d emailed Pat two weeks before (because I’m a disorganized piece of crap) to let him know we’d be in Halifax for the day… and would love to see him… but we understood that it was crazy last minute so no worries if he couldn’t… but we would love to see him, and further easygoing yet pleading statements followed by ellipses. Supercool guy that he is, he cleared his schedule for the day so he could be with us. It had been eleven damn years since we’d seen each other, when he’d passed through Ottawa on a road trip, and we were beyond overdue to meet up again.

He met us near the dock, looking unaged in a way that was criminal (which did not surprise me in the least). I hugged him until he pooped, and then we went for a walk. There’s a very nice public park near his apartment and we started there, catching up a little bit on life and career stuff. Emerging from the park, he drew our attention to the crane. When Hurricane Dorian passed through in weeks prior, the winds were strong enough to break a construction crane than was affixed to a tall building downtown. The crane fell on the building beside it, causing damage but surprisingly injuring no one. Weeks later, the crane is still there, lodged into the building beside it, as people (crane authorities? the mayor? the descendants of Alexander Keith?) figure out how to remove it without causing a rain of brick and metal to come down on everything around it. Following this, the first thing out of the mouth of everyone else we meet that day is “have you guys heard about the crane?!?” 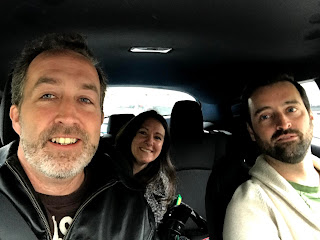 It’s a brisk frigging day, and I don’t drink anymore, so we spend a lot of time in coffee shops. The first is The Cabin, which Sarah reminds me is the same place the three of us had coffee the last time we’d travelled to Nova Scotia. We caught up on each other’s kids, and also heard fascinating stuff about Pat’s work (he’s a psychologist specializing in PTSD and childhood trauma). From there, Sarah split off to meet with Nicole, her friend from Catechesis who she’d worked with long distance but never met. Pat and I took a roundabout route to a place on the water that I think was called Murphy’s. (I usually rely on pictures to remind me of restaurant and place names, but I took about four pictures this day because I was just enjoying the hang so much). We had fish and chips, talked about old University folks – old friends, frenemies, enemies, and straiI’ve ever experienced, the waitress referred to me as “Mr. Green Eyes” while delivering my entrée. I will admit I went as high as 15.1% on her tip.


ght up nemeses (Stroud!) Then, in the most tip-soliciting fake flirt

Coffee shop two was The Apothecary. We met back up with Sarah and then wandered into various shops and fondled various merchandise. In a music store, Pat demonstrated that he still has guitar chops, and I demonstrated that I can play neither the banjo nor the mandolin. Then we met up with Pat’s girlfriend, Steph, picked her brain about her area of speciality (ADHD), and moved on to the third coffee shop, The Glitter Bean. On the menu was something called "Blank In The D 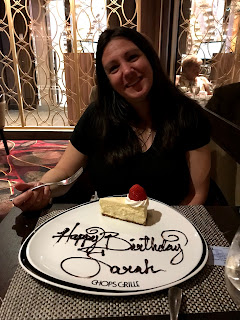 ark." Posters on the wall suggested that it had been named after some kind of experience (also called Blank In The Dark) that was recently held at the coffee shop. I call it an experience because that’s how the poster described it; a multisensory experience, if I remember right and not that I know what that means. I do know that it involved bands with names like Torso and Panties. And I do know that the poster was mostly just black. I decided that I didn’t want to know what the drink actual was, I just wanted to have one. When the barista handed the cup to me, I missed part of what she said but it was something like, “the mumble mumble machine isn’t working, so I only gave you the four shots of espresso.” There are times when I really enjoy the taste of bitterness, and thank God this was one of those times, but I was grimacing and shivering through those last few sips. We had a good little chat with Pat and Steph, but then we suddenly realized that it was 5:11, and the gangway was going up at 5:30. Pat zipped us over to the port as the anxiety/caffeine cocktail brought my heartbeat up to about 200 beats per minute. But we made it to the ship as a late tour was just getting back, and had no trouble getting in on time.

It was also Sarah’s birthday, so we had dinner at Chops for the second time that cruise. Sarah recreated her first meal to great enjoyment (I switched from a filet to a nine-pound ribeye which stayed lodged in my upper digestive tract until late the next day). The staff also brought over a smartly decorated piece of cake and sang their traditional atonal version of Happy Birthday to her, and it was a pretty great day from start to finish.