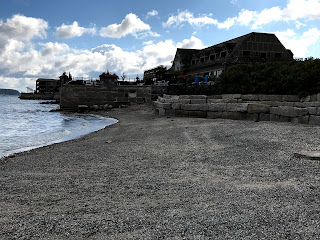 We’re in Bar Harbor, Maine, which is a brand new state for both of us. Disembarking goes smoothly, and we’re off and wandering the town soon enough. It’s just after eight so there’s not much open, but we stroll around, getting a lay of the land and hitting various Pokestops (because we are sad adults who make Pokemon Go a priority whenever we’re in a new place.) Eventually we stop for coffee at a place called The Independent, which happens to serve the hottest Americano that the world has thusfar managed to create. I can barely carry it to our table, and I tell Sarah, “I’m gonna drink this… tomorrow.” We soak up free wifi and I manage to get the coffee inside of me, and then we head over to church because it’s Sunday. I’m hoping for a super baa-haa-baa-ry accented priest, but this one just sounds exactly like Ray Romano (who is not from Maine, so far as I know, but I’m entertained none the less.)

After mass, we walk over to the water – to where the bar of Bar Harbour will later emerge. At this point in time, there’s nothing to see but water and an island on the other side, but Sarah promises that later in the day when the tide lowers, we’ll be able to walk across to Bar Island. It’s lunchtime (or near enough), so we eat at the Side Street Café, which is without question the best meal I have the entire trip. It’s a family -run restaurant that’s been around for a while. Under the glass tabletops are photos of the family that operates it, and most of the pictures are from 10 – 15 years ago. The mom, a little greyer but easily recognizable, is our bartender/waitress, and one of the daughters is easily spottable too. The two of us split crab-dip, clam chowder, a lobster roll, and blueberry pie. Incidentally, this meal features the best crap dip, clam chowder, lobster roll, and blueberry pie I have ever had in my life. 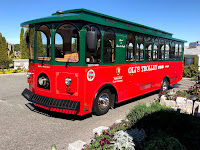 Next we have a tour with Oly’s Trolleys, which will take us all through Acadia National Park. Our tour guide is Texan: “I’m Clay, and I’m from away. Because I’m not a local, I pronounce my Rs, so welcome to Bar Harbor!” Clay explains a localism that’s echoed a few times by other folks we meet: if you’re not from Maine, you’re from away. Doesn’t matter whether you live one footstep beyond the state line or St. Petersburg, Russia – in either case, you’re from away. (Our guide the next day – from New Jersey but into his fifteenth year in the state - tells a story about being at a wedding where his table mates asked, “where are you from?” When he answered that he lived in town, they said, “No, where are you really from?” 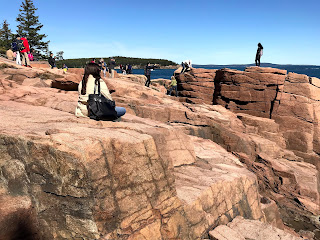 On the way to the first stop, Clay tells us the history of the park (more than I can fully remember or copy in here). The gist being that extremely wealthy folks bought and donated the land a piece at a time, and the government readily agreed to turn it into a National Park because all of the property had already been paid for with private money. Also, the town was originally named Eden when it was first founded, but so much town talk was about the bar and whether or not it was currently blocking marine traffic, that the town was eventually renamed. Our first stop was the Thunder Hole, a beautiful scenic spot with rocky platforms and pillars – tons of great vantage points to sit and watch the water. Next we stopped at Jordan Pond House, where we took a quick walk on part of an old carriage path that runs through the park. Last, the trolley got us to the top of Cadillac Mountain. Beautiful but windy AF, and I soaked in the views as best as I could while pretending not to bitterly regret the choice I’d made to leave my jacket on the ship.

Before heading back to the ship, we returned to the area where the bar hadn’t been revealed earlier. Not only could we see it now, but it was probably forty feet wide in parts. It’s a mix of small and large stones, and a much dryer walk than I would have expected. We trekked across to Bar Island, and then did a kilometer-long walk to a nice vantage point of the town across the harbor. I don’t recall our total mileage for the day, but I’m sure it counterbalanced at least a third of the 4,500 calorie dinner I had that night.