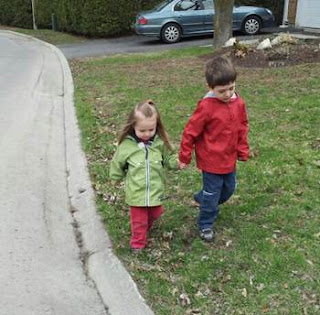 I love my kids.  I’ve been staring at this screen for the past ten minutes wondering where to start, and that’s my best attempt so far.  There are two reasons I don’t write here much these days.  The first reason is that I’m incredibly, incurably lazy.  More important is the second reason: the more time goes on, the more I feel compelled to write honestly.  Which is not to say I was dishonest before, just that it’s been easier to fall back on hyperbole, jokes, and cliché.  It’s why my posts about Sarah are so hard to write.  I don’t just want to say, “She is the best, greatest, most wonderful woman in the history of time!” whether I believe it or not.  I want to find honest and original words to explain precisely why I think she’s amazing.  She really is the greatest, the facts are there.  It just takes patience to find the right words.

My kids are really good friends right now.  I like to think that’ll always be true.  Yes, I’m probably wrong; no, I don’t want to hear otherwise.  For the time being, they love playing together, they look out for one another, sometimes they hold hands when we’re walking together  – they like each other at least as much as they like us.  And they’re funny, at least half of the time intentionally so.  The unintentional laughs are easier to recall.  Like Veronica’s “I get bigger and bigger…” line.  For the most part, Veronica accepts the fact that she isn’t yet three, and there are certain things she just isn’t old enough to do.  Like ride Teddy’s bike.  When we told her she was too little for it, she got this wide-eyed, hopeful look and said, “I get bigger and bigger, and then I ride Teddy’s bike!”   She says that about everything.  Here are just some of the things Veronica is patiently waiting to do once she gets bigger and bigger: 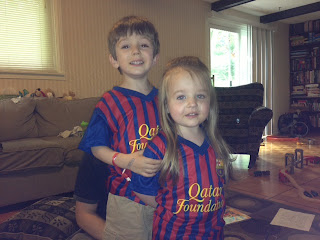 She’s got my sense of humour in general.  As young as she is, she has a really great appreciation for the absurd.  We’ll be sitting down having dinner, everyone’s silent, and she’ll turn to me and start making weird animal sounds – like an angry cat with sinus congestion.   Another good example: the first time we explained to her that Mommy was going to have a baby, we asked what she’d do when the baby got here.  She said, “I hold it, and I snuggle it, but I don’t put it in my mouth!”  Okeydoke.  It took Teddy longer to come to terms with the baby, which we think was because he was hung up on the mechanics of it all.  Why is there a baby in Mommy’s tummy?  How does it come out?  Sarah explained the process to him in the most basic way she could, and when she was done Teddy paraphrased as follows, “The baby’s getting bigger and bigger, and when it’s ready it’s gonna jump out!”  More or less, kid. 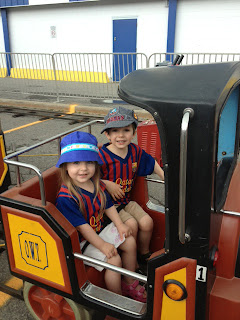 Tedster is still a very big train aficionado.  All little boys have a train stage, I think, but while each of Teddy’s friends have moved on from trains (to bush parties, bareknuckle boxing, or whatever kids are into these days), Teddy still remains an enormous fan.  The fastest way to get him to change out of his pyjamas in the morning is to dangle a Thomas & Friends shirt in front of him.  I can make his whole day by rearranging his train table into some new configuration of tracks.  He remembers all the trains he was given as presents and who gave them to him.  And he holds in his head a very detailed inventory of trains he doesn’t own but has played with at someone else’s house.   He comes by it honestly, though.  Grandpa has sixty years on him and he still loves trains with a vengeance.  And I’m not complaining – I prefer Teddy having fixed interests rather than just being into whatever random thing his friends are into that week.  And the cheapskate in me is happy that all that money put into trains, train-themed clothes, and train-oriented vacations was well spent.

Veronica likes trains because Teddy likes trains, but if every train and track on earth suddenly vanished, she probably wouldn’t notice.  I’m looking forward to her interests taking greater shape as she gets older.  She likes dolls and stuffed things, but she isn’t obsessed with them.  She’s liked books from an earlier age then her brother, and she’s happier to explore a new book than Teddy (who’d rather hear something familiar over something new).  Randomly, Veronica likes to grab two books, give me one, and then have us both read our books aloud at the same time.  Makes zero sense.  Also annoys me. 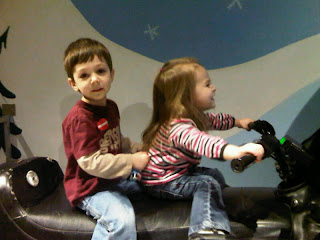 Both kids have incredible memories.  We’ve known this about Teddy for ages – how he knew all the words to his favourite books and songs, how we could distinctly recall things that happened years ago.  Veronica’s got it too, she just doesn’t show it as frequently.  But the other day we were driving in the car while the kids were watching Blue Mountain Mystery (a Thomas movie, naturally,) and as it played, both kids recited every bit of narration and piece of dialogue for the first five minutes of the movie.  And it’s not like we’ve watched that movie one hundred times.  They’re smarties, those   Which means I’m doomed.  At least for the moment, I get to be the second smartest person in this house.  How many years before I’m officially the dumbest?  Ten.  I give it ten. 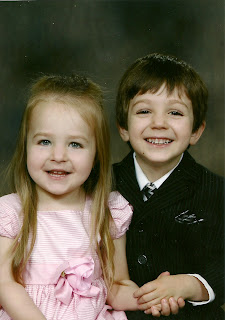 I still have a couple things over these kids, like I understand the concept of time.  For both Teddy and Veronica, there are three states of time: the immediate future, right now, and yesterday.  The distant future just doesn’t exist for these kids.  If we’re doing something exciting weeks or months from now, we can't tell them any earlier than the day before because they’ll drive you bananas.  Teddy’s the worst offender.  Tell him on Tuesday that we’re going to Georgetown on Saturday, and he’ll wake up at 5am every day in between saying, “We’re going to see Nanny and Poppy today!”  They both have a good handle on the present, so that’s fine.  But for them, everything that’s happened before now happened ‘yesterday.’  There’s no real harm in that one, it’s mostly just funny.  “We went to see a movie yesterday!”  (A week ago.)  “Yesterday, we went to Dutch Wonderland!”  (A month ago.)  “I fell off the ladder at the pool yesterday!”  (Well over a year ago.)     The birth of nations, the discovery of fire, the formation of the cosmos – it all happened yesterday.


They`re fun, enthusiastic, good-hearted kids, and right now they make parenting really easy.  They`re good at independent play.  They`re not too rowdy and not too docile.  And these days, they`re really good sleepers.   I`ve spent the better half of this year feeling well-rested, which is a feeling I never thought I`d rediscover until somewhere around my early sixties.  Which is why we`re having a third kid, just to throw things entirely out of wack again.  I`m not complaining.  It`s what we signed up for, and happily so.  People keep asking if we`ll be done after three.  Probably?  It’s not the work or the effort that puts me off having more, I think I’m just going to be too old.  I don’t want to be hobbling after baby four with a snow-white beard and absolutely no hair, hearing Teddy complain, “What’s wrong with you, Dad?  You used to be young yesterday.”

Anonymous said…
They are the BEST and so are you guys as parents!
Love the post and the photos.
Nonna
4:44 pm

Beth said…
I was so excited to see a new blog posting from you in my RSS feed. It's been since like yesterday since you wrote one!

Thanks for sharing the photos and the stories. It makes me feel a little less far away when I get to hear about these special day-to-day moments in your lives!

Also, I like that you told Veronica she won't grow a penis, but appear to have let her think that when she's big enough, she'll grow a beard.
8:24 pm