January 27, 2009
Dooce writes her monthly letters to Leta—she’s somewhere close to month sixty by this point—and they always make me think, how much is there to say? I mean, really. Month after month. Sure there are the important milestones—they start walking, they learn to speak, they come home wasted for the first time—but between these big moments I figure there’s just a lot of the same thing over and over and over again. Well, we’ve had Teddy for a week today, and I realize that the real question is, what do I have to leave out? How much can I tell before I lose everyone’s interest except my own? All complicated further by the fact that my time comes in drips and drabs. Two minutes at a time, maybe five if I'm lucky, before I'm off to deal with another blown out diaper, or off to give a bit of love to the cats (who feel so neglected they've learned to ride bicycles and speak French just to catch our attention).

And damn. I've been sitting here staring at the screen, burning daylight (figuratively), trying to figure out what to say. I keep starting and stopping because all the stories are big. So let's just say the important things. Labour was long; in parts exhausting, in parts really scary, and short of a few gravol, Sarah pulled the whole thing off drug free. Teddy was healthy, with all the right limbs and digits, and right off I felt pretty strongly like I knew what to do (generally speaking. Finer points like don't let the kid slam his feet down in the meconium after you open up his diaper for the first time have been coming through experience.) We've dealt with dehydration, we've been to a hospital to check out his jaundice, and we've learned that breast-feeding can be incredibly hard depending on your circumstances. There have been a hell of a lot more bad times than I expected there to be in the first week of the life of my kid (dehydration day being among the top three most awful days of my entire life), but the times in between have made up for it. I hate to use a cliched phrase like 'everyday magic' but it's the most appropriate one I can think of. 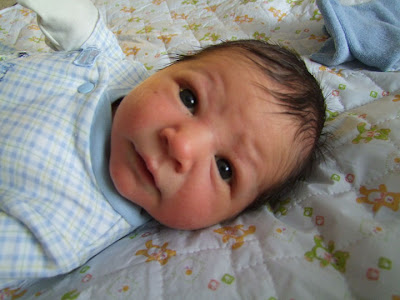 I can, and have, spent hours just staring at this kid. Often, I'm wondering who he really looks like, and I change my mind five times a day. He has looked like: my Dad, my Poppy, Sarah's dad, Sarah's nonno, and Sarah herself depending on the day and the expression. He'll stare back at you, and even though I know all he sees is some kind of blurry, shapeless monstrosity, I like to think he's fond of me too. The best stares are the I'm pooping stares. He frowns, gets a kind of pleading expression, and this is followed by wave after wave of poop reverberating against your lap, and all the while he never breaks his gaze, never even blinks.

Anyways, seven days in and we're still getting our bearings. Sarah's mom has been staying with us and she's been a godsend--keeping us fed, watching Teddy, and giving much-needed pep talks. On Thursday, more help is on the way with the arrival of my parents. So we're in pretty good hands. We're good parents, I think, but we need the backup. Maybe next week we'll have the entirety of parenthood figured out. Thus far: not so much.

Anonymous said…
Dave your blog makes me sooo happy. You two are doing wonderful! I wish I could be there to share more time with your growing boy. WOW...so proud and so JEALOUS! LOL

I'm thinking of you both...and of course your Teddy bear.

It's pretty amazing. Another cliche: It's like a roller coaster.

It gets better, then feels like it's getting worse, and then it gets better again, and so on.

I'm really happy for you.

Considering I'm your friend, Teddy should be a piece of cake.

I mean, come on! I poop at least twice as much when I sit in your lap.