October 26, 2008
So, Sarah’s pregnant. The reason I say this so cavalierly is not because I’m ambivalent or frightened, but because there are approximately three people I can think of to whom this would be remotely new information. And all the rest of you are thinking, “What the hell took you so wrong to write about it?” Good question. Here is a list of reason why I haven’t mentioned this before, ranked by lameness (starting with not at all lame and ending with highly, highly lame)

Sarah is just about twenty-eight weeks along and everything is going great. First trimester was awful for her; just near constant nausea coupled with just about every other pregnancy symptom a girl can get. Second trimester has been almost entirely good times, and I say this because I’m not the one wearing belly belt pants and getting booted in my vital organs. As of Tuesday, we’re officially into third trimester, so I’ll let you know how that turns out. 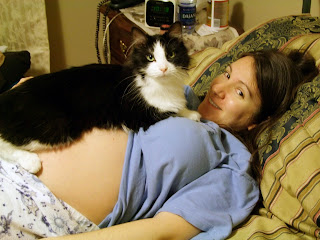 We’re having a boy, and I’m strangely reluctant to share the name here—even though we’ve told every single person who’s asked us. I will tell you what we call him presently: Humpy. It started as a joke, something to replace Cobra Commander, which had been our placeholder name at the start. But when we were at the Georgia Aquarium back in July and we learned about the humphead wrasse, I turned to Sarah and said, “That’s what we’re calling him from now on: Humphead.” Humphead quickly became Humpy, and while we used it jokingly at first it wasn’t very long before the name stuck and we starting using it in an earnest and affectionate way. “How’s Humpy today?” “Humpy’s on a growth spurt.” “Look, Humpy and Moe are hanging out.” And as you can see, Moe likes to perch on Sarah’s belly and purr, which always results in jabs of acknowledgement from Humpy. I personally have been kicked in the ear, the mouth, and the cheek by Humpy, but I haven’t yet been kicked out of bed (although I’m told this can happen).

So, that's an awesome photo. Vigorous approval process FTW! I showed the pic to Tod and he was all "that's a big cat!" and I was all, "And that's their *small* cat!"

We like cats. And cats on baby bellies are awesome!
10:47 pm

Anonymous said…
What's wrong with Cobra Commander? How many kids in his kindergarden do you think are going to have that name?
11:11 pm

Anonymous said…
a #1) You've never told me the name, even though I've asked.