Here are your Spring 2008 Champions: XXH!

June 25, 2008
My rec soccer team played the championship match last night, and we just decided to go ahead and win the whole shebang. I’m still reeling from it, to be honest. (See: Dave’s comments about never being on the winning team.) Crazier still is that we absolutely earned it. There were no fluke goals, no short-on–subs teams. Two games in a row we played against a tough, skilled bunch of folks, and both times we can away with solid wins. Three weeks ago we were ranked somewhere in the middle out of a league with nine teams, and I for one thought we were destined to stay there. But we just squeaked into the playoffs, thanks to spirit points believe it or not (remarkable for a team whose spirit points were for shit just a season ago). Then we went on to beat an undefeated team in the semi-finals (shut them out even), and won against another hard-ass team (that trounced us only a few games back) to take the whole thing.

I can’t say I played my best, but the team as a whole was outstanding. Lots of hustle, crazy defence, outstanding goal-trending, and a couple of sweet goals. It’s pretty amazing to see what team morale can do. It’s something you don’t notice until you’ve lost it. The first time we played this team, they got three quick goals that was the end of us. We were depressed and lazy and we played like ass. And yesterday in the second half, we got to see the other team’s confidence just disappear. They started playing sloppy, they started to bitch each other out, and we just owned the field. It came down to a shoot out in the end, and thanks to three great strikers and an unstoppable goaltender, we took the game.

Feels very surreal. We’re going back to All Sorts next season, and I cannot wait to play our first game. Here’s the team. The good-looking one? That’s me. 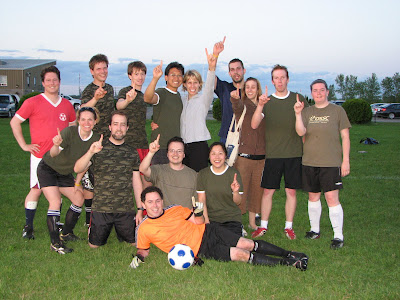 So far, all but two of our Ultimate Frisbee games have been cancelled because of "weather".
5:44 pm

Dave said…
Rebecca - We switching to All Sorts of Sport next season and our first sport is Ultimate. And we're gonna get killed. Pray for Mojo.

Beth - Well, the camo shirts are the primary shirts but stupid Old Navy came up short so we grabbed a couple of the plain green ones instead. The non-matchers are subs, or people who were all "if I don't wear a wicking shirt today I'll DIE." If we'd lost, it would have been thier fault.
12:18 pm