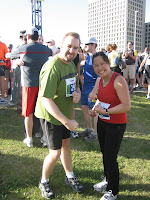 It’s the morning after the MDS Nordion 10k and I feel pretty decent. Of course, my old man's knee is feeling typically old man-y, and rolling out of bed induced more shrieking than it usually does, but otherwise I feel good. Everything about this race went better than I expected. We (Isha and yours truly) went in with modest expectation. We were in it for the run itself, and while the closer we got to 60 minutes the better, we weren’t going to kill ourselves in the process.

saw the crowd. I’m usually inside my head the whole race, but this time I finally saw the huge numbers of people that come out and cheer, and it makes a big difference. We also had our own cheer team, also a first for me. Cathy showed up in a bunch of different spots around the course, snapping pictures and biking around like mad. And Joe and Emma made a couple of fantastic signs, ones that must have required a trip to the crafts store and were a thousand times better than any marker-scrawled-on-foolscap sign I’ve ever made. (Sarah was tied up in , helping her Nonna pack up 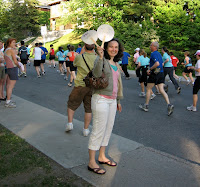 two houses and five decades worth of knickknacks, doodads, and bric-a-brac.)

It was a tightly packed run from start to finish. The crowd thinned out a little around the halfway mark, but we were still dodging around people right to the end. We ran ten and ones the whole way, and outside of the tanks running a little low around the 8.5k mark, it was smooth sailing. At the two hundred meter mark, Isha looked at me and said something—the actual words are lost to me now but the basic meaning was, “Are we gonna give’r?” I nodded, and she took off like she’d been shot from a cannon. I always throw in a little pick-up at the end of a race, but I’ve never run that hard for a finish. Don’t get me wrong, it was great, but I don’t think it would have been physically possible for me to run any faster than I did. We came in at 1:06.45, which I’m totally pleased with.

Great race, great running mate, great support. Running this has not inspired me to sign up for a half marathon, but I’ll definitely be looking for something of the 5 – 10k variety over the next couple of months.

Re: not being inspired to run a half marathon... just so you know, last year at this time I was saying "People who run half marathons are CRAZY! You'd have to be certifiably insane to do that!" And we all know how that turned it.
8:35 pm

This means you both can carry all the gear for being the new Body Break spokespeople.

In other news: That last pic of you looks fakey fake.

Anonymous said…
Does that mean I don't have to carry anything?

Anonymous said…
No, you are smart...I do not recommend the half.

I just did a 5K in Tokyo...I guess there's a 10K this coming weekend in Ann Arbor that I am not ready for, too.

Have I mentioned I hate running?
2:13 am

Jay said…
Well, I'm not going to lie, Dave. I lost some money on this race. Guess you'll have to pick up your sicks a bit the next time around.
3:57 am

Unknown said…
So late in reading this... Congratulations!

Try trail running! It's the same distances, but manages to be about 10% longer (time-wise). It's fun cuz you can trip over stuff!
11:50 am