What 's New With The Zoze 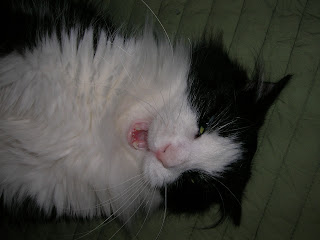 He's a bit of a paste-eater, I think we've mentioned that before. In all honesty, we suspect he was taken from his mom too early. But he's cute, and he's (above photo excepted) a pretty happy-go-lucky cat, so it's not like he's been short-changed in life.

Further evidence to his being taken too soon from his mom (but not of his literal paste-eating), every time our boys have a stay-over at the cat B&B--during one of nine yearly cruises--he comes home having learned something new. Not exceptionally new (the cat's not making me a sandwich or anything) but he just learns basic skills that most normal cats have. Like meowing. What he does now is a sad approximation of a meow, but before we'd ever taken him in to the B&B literally no sound came out when he meowed. Really, there's two types of meowing he learned, but I'll get back to the second one. He also learned to knead there. Never did it for, like, the first six months of his life, all the sudden he comes back home and kneads like it's going out of style. He also learned a few superior scraping styles, but at least that was to be expected.

The worst thing he's learned, by far, is how to annoy to get attention. (One could argue that he learned that from me. One would be wrong, though. One would also be Sarah.) For instance, he knows not to touch the speakers. Our stereo speakers belonged to Sarah's dad, purchased some time when he was in University, and they're still performing at a kick-ass level. But the material and the height make it a very sexy target as far as cats looking to scratch things go. Any time he'd gone near it in the past, we've hollered bloody murder, and he would be off like a shot. That used to be the case. Now, when he wants attention and we're in the living room, he'll walk slowly to the speaker, put his paw softly against it, then look back at us as if to say, "Check it out. Gonna be bad here. Just so you know. In case you wanna do something about it." More commonly and (arguably) more annoyingly, he'll come bug the shit out of you when you're on the computer. You're be happily surfing away, gathering all sorts of illegal MP3s and pornography as usual, and the Zoze will walk in and go, "Meeeeeee!" And again, "Meeeeeee!" And again, and again, and a-fucking-gain. And if you keep ignoring him, he'll jump up on the cabinet and start knocking shit off until you chase after him. 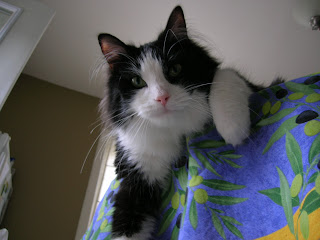 If he wanted more food or water, of if the litter box was a castle of poop, it would all make sense. But what he actually wants is for you to follow him to the kitchen. And then? Nothing. That's it: he just wants to hang out with you in the kitchen. Once there, you can pet him or not, he really doesn't care. It's mission accomplished and he's happy.

He's the reason I drink, by the way.

Anonymous said…
You need to go check out this baby onesie t-shirt!! Buy it for the Zoze!
1:02 am

Anonymous said…
Do you want to trade cats? Mine brought me breakfast in bed - two semi-dead mice. I have no idea where he's finding them, since I spent Saturday sealing holes and cleaning up messes.
9:45 am

Sassmaster said…
This sort of thing is why my neighbors often hear my yelling "What!?! God!"
1:49 pm

It sounds like you are perfectly suited for each other. ;)

Jay said…
Sounds like you're in serious need of cat bootcamp!
2:15 pm