We Don’t Practice Polygamy, We’ve Had It Down Pat For Years

We come to the morning I dread most. Sarah has signed us up for a van tour of two national parks in Utah—Zion and Bryce Canyon. That part I have no problem with. The dread part revolves around our pick-up time (six a.m.), and how I offered to run and grab us breakfast beforehand, and that we both went to bed pretty much pist loadded. But I’m out of bed and moving by five. The casino is still surprisingly busy. A lot of cleaning staff, a lot of freshly-risen seniors, and a lot of bored wives sitting beside husbands who just won’t quit. Bad-for-us-breakfast, showers, coffees, and we’ve on the ground ready to depart.

The van is on time. Our guide is Andersen—a nice, knowledgeable guy who’s totally tireless. There were supposed to be five of us on the tour, but two people cancelled at the last minute, so the only passenger is Chuck, a concierge from San Francisco. Chuck is extremely naive and a terrible listener. At the start it’s sort of endearing and sweet, but by the end he’ll have frayed our every last nerve. By 6:30 we start the long trek northeast. Nevada is one big desert, but you don’t really understand how barren it is until you get a half hour outside of Vegas. It’s a damn wasteland. There’s nothing but sand, mounds covering mob-murdered corpses, and desperate little casinos that incentivize like the devil on the stray hope that anyone would come out this far. Just under two hours in we pass into Arizona, which is much the same minus the casinos, and plus a lot of red rock and a highway hewn between sheer rock face. About forty minutes after that, we enter into Utah, the 31st state that Sarah has visited (two more states than her age, and in keeping with the goal of ensuring Number of States Visited > Her Current Age)

Andersen diesels up the van in a town called St. George, giving me the chance to purge nine gallons of Starbucks from my system in a nearby Jack In The Box. After an hour back on the road punctuated by stunning views, we enter Zion National Park. Zion consists of a series of narrow canyons surrounded by enormous sandstone cliffs. In the proper seasons, you can drive a vehicle through, otherwise you’re only option is a shuttle bus. Fortunately, we’re in the right season, and it’s a beautiful day, so Andersen drives us through the park, stopping at various walking trails where the three of us take short hikes. You can, if you have a half dozen hours, walk trails that wind up to cliff crests. You can also do some hard core rock climbing. But we don’t have the time and nor are we X-Gamers, so we only take a few of the smaller trails. The most interesting of the lot is one with a sign saying ‘TRAIL CLOSED’ that looks totally fine at the start. But after hoping the sign and winding upwards, it becomes steadily more fucked up until it’s all ice slanted rock and busted guard rails. We’re too hardcore to stop though, so we make it to the top to the Weeping Rock and get some great pictures for our effort.

Back on the ground, Andersen points out that pretty much every structure was given a biblical name by those God-lovin’ Mormon folk: the Three Patriachs (with names something like Isaac, Jebedozetha, and Methuzalachakakhan), The Pulpit, The Great White Throne. It’s an easy learning experience because, thanks to Chuck, we hear everything twice. Andersen would give a twenty minute dissertation on every geologic event that formed the park, from tens of thousands of years ago to the present day, and then Chuck would immediately say, “So you’re saying we’re in some kind of canyon?” We hit a few more Zion hot spots, then get back into the van, off towards national park two. On the way we pass through the Mt Carmel Tunnel, which was created as a make-work project back during the Depression. Cars weren’t so Hummer-y back then, so nowadays, if you’re driving through in an oversized vehicle, they close traffic while park rangers escort you through the middle of both lanes (and charge you for it).

An hour or so later, we roll into Bryce Canyon. Whereas in Zion, we travelled through the base of the park, in Bryce we travel along the rim. What makes Bryce amazing are the hoodoos—created by years of ice and rainwater wearing away the limestone to form beautiful banister-like spires that extend high into the air. From the rim, it’s upwards (or I guess, downwards) of a 2000 foot drop to the canyon floor, and what’s really mind blowing is that there are no guard rails. They actually trust people to see that there’s a huge plummet in front of them, and to know that going for a tumble is a really bad idea. Andersen lets us off at Inspiration Point, and we hike the forty minute trail to Sunset Peak. After this, we take a short jaunt on a downward path, but can't get to the bottom because the path is slick with mud (Sarah’s jeans are a freaking mess by the end). Before leaving, we stop into a little shop just outside the park and buy a shotglass that says ‘Eat, Drink and Be Merry—Tomorrow You Might Be in Utah,’ and the old lady rocking the cash gives us the most dour expression in the history of dour expressions. Lady, if you find it offensive, don’t sell the product in your Jesuz-lovin’ shop. Having skipped lunch, Chuck picks up a grab bag of snacks and two beers, which he proceeds to drink in the car on the way back. Buddy, we left Vegas two states ago, and even in Vegas that probably doesn’t fly.

It’s a hard four hour drive back. We sleep the first two, and grab some ass-quality tacos from Jack In The Box during a gas-up stop in St. George. Two more hours to Vegas and Andersen is a damn soldier, doesn’t yawn, doesn’t complain. We hit a bit of traffic just outside the city, and Chuck—who’s been conscious for maybe fifteen minutes of the drive—pulls a little suck fit. All class, this guy. Chuck follies aside, it's a fantastic trip. From start to finish, the tour is just under thirteen hours, cost one-fifty a head, and was so very worth it. Nice work, Incredible Adventures!

We’d figured we’d have a post-tour immediate collapse into bed, but thanks to the sweet van naps, we’re good for a few more hours. Our first stop: 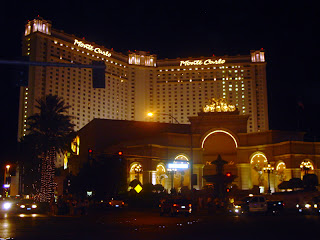 The Theme: It’s modelled after the same-named casino in Monacco.
Why You Know It: You probably don’t, unless you and Princess Grace hung out at the Monacco namesake back in the day.
What’s Good: It’s tasteful...
What’s Not So Good: ...but terribly dull.

I have an early victory that slowly bleeds away, and Sarah doesn't see much action at all. We leave shortly thereafter and head back to NY, NY, and due to her superior ability to realize the short gain, Sarah has a few decent wins and ends up even for the day. Moments later, we fall exhausted to bed.

Anonymous said…
Nice.
I figured out that I don't need to do anything anymore.

By the end of 2010, you will hav egone everywhere on Earth.

Then, I can eat your brain, and gain all of your experiences.