February 11, 2007
Out of bed and moving be ten, we have faux McMuffins at a coffee shop downstairs at Caesars. Then we zip over to the Venetian for another test screening. It’s at American Test Studios, which is no studio city (the staff don’t really know what’s going on, what we’ll be watching, or how long it’ll be). While we’re told we’ll be watching one show, we actually get snippets of three reality TV shows. They are:

For our time, we score two free tickets to Madame Tussaud’s, which is good because we’d never actually pay to see it. It’s designed to be very interactive (to this end, the figures aren’t wax so much as… wood, maybe?) You can cozy up to J-Lo, try to dunk on Shack, audition for Simon of American Idol, or as Sarah did, put on a wedding dress and live out your dream of marrying George Clooney. From there, we went North to Wynn, then gambled our way southward while fulfilling our goal of picking up matchbooks in every major casinos on the strip (henceforth known as MatchQuest 2007). It’s a super slow day for drinks, so we end up getting drawn into a shithole called:

O’Shea’s
The Theme: Don’t waste our time—give us your money.
Why You Know It: You don’t.
What’s Good: Nothing.
What’s Bad: Everything.

We only go inside to further MatchQuest 2007, and because of a sign out front promising one dollar draft beer during happy hour (10am – 3 am). Once inside, we decide to play a little video poker, and the bartender gives me sass for not playing full credits, actually calling out to a colleague, “Hey, this guy’s only playing one credit at a time. Pffft.” So I glass the fucker, and we move on.

A short way down the road, we come upon 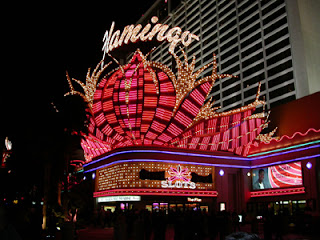 The Flamingo
The Theme: Pink.
Why You Know It: It was the first significant casino on the strip, financed entirely by mob money. It was once owned by Bugsy Siegel.
What’s Good: The fact that it’s still standing. There’s also a nice little wildlife enclosure in the back with—among other things—a flock of Chilean flamingos.
What’s Bad: It’s dated, and there are so many better places a step away.

We’re there for about an hour, but slot wins and drinks are hard to come by so we head home. Tomorrow is the day we go home, so we do a bit of packing, have a few drinks, and watch some teev. Funnily enough, Ocean’s Eleven is on. After some down time, we decide we’d rather watch the fountains at the Bellagio than watch Danny Ocean’s crew watch them, so we stroll on down. We see the fountain show twice (they go off every half hour). The first time it’s a dull sort-of ballet, but for the second show is to the tune of the Calgary Winter Olympic theme, and it’s just one forty foot blast after the next. Phenomenal.

Beth said…
or as Sarah did, put on a wedding dress and live out your dream of marrying George Clooney.

Please tell me you have a picture of this.
8:08 pm

Anonymous said…
That's just what I was thinking, Beth!

O'Shea's totally looks like a place I'd get sucked into purely for the Irish factor.
8:17 pm

Anonymous said…
We do have photos, though the digital one didn't turn out that well.

I should note - the dress = not at all flattering. It is one of those "velcro at the back, one-size-fits-all" numbers. The fake wedding chapel and the fake flowers, as well as the "Our Special Day" sign that were part of the set up were just gravy.

Dave said…
We took one with the SLR that I hope turned out a little better. I'm thinking of joining the Flickr revolution, so proof of Sarah's polygamous deeds (after we left Utah, no less) should be available shortly.
5:45 pm

Anonymous said…
That leprachaun scares the bejeezus out of me.
9:06 am