Resistance and Other Futile Measures

February 06, 2007
In the morning we have breakfast downstairs at Il Fornaio. It’s basic breakfast fare, noteworthy for its good espresso and its off-puttingly coiled sausage. We zip over to MGM to score tickets for Studio City, which is a place where they test out new shows (or, as we learn, variations on old shows). We lie about being from Ann Arbor because previously this was only open to Americans, but it turns out after the fact that they’ve opened it up to the whole world, even invaders from the north, so all the lying is for naught. The show we preview is The Price is Right (wuh?), but they’re testing out new hosts in the wake of Bob Barker’s retirement announcement. We witness the host stylings of one Todd Newton—who’s actually pretty good. He’s neither a Bob Barker clone nor the anti-Bob Barker—he’s just a sincere dude with decent contestant rapport.

Out of there, we stop by the lion enclosure and watch a couple of smallish (but huge-pawed) lion adolescents gallop around and take cheap shots at one another. This is followed by a bit of multi-hand video poker (played by us, not the lions), a few drinks (again us), then we catch the monorail way the hell north to the Hilton and Star Trek: The Experience. We have tickets that allow us entry into the two main attractions: Borg Encounter (in 4D), and The Klingon Experience. We go see the Borg first, which turns out to be my favourite of the two. Basic story: you (and the group you go in with) have been invited to a research lab because a DNA scan has revealed that something about your genetic makeup suggests you may be resistant to the nanobots that the Borg use to assimilate people. In an unfortunate coincidence, the Borg suddenly attack. You’re made to flee down a hallway as real live Borg stalk after you, grabbing people and fucking shit up old school. Next, you’re led to a shuttle and strapped into seats for the 4D part of the show. Where is the fourth dimension? Let’s just say: somewhere inappropriate. Your shuttle flies off but then gets pulled into the Borg Cube, where the Borg Queen starts talking smack, and then the assimilation begins. A big-ass 4D probe floats in front of you, then you feel a stabbing pain through your chair. Sarah got it in her upper upper thigh, and I got it in the back. I actually shouted out: “YEAAAARGH!” while Sarah was just incensed that the Borg got fresh with her. It was awesome. Anyways, blah blah blah, Janeway flies in with the Voyager, shoots up the place, and saves the day.

Sarah preferred the less stab-tastic Klingon Experience. You begin on a ‘real tour’ which gets you as far as the elevator, but then you’re suddenly transported into the future, onto the Starship Enterprise, no less. An officer leads you to the bridge, where Riker (on screen) gives you the scoop. The who, what, and why are a little fuzzy, but basically one of you is an heir to Jean-Luc Picard, and there’s a small fleet of Klingon battleships on the way to take you out, and make it so Picard never existed. Like the Borg show, this one also has a strapped-into-a-shuttle bit, but this one is a motion simulator. Historically, motion simulators make me hella sick, but I make it through this much less pale and sweaty than usual.

Lunch is at Quark’s, which is less a replica of the same-named bar on DS9, and more an amalgam of different Star Trek stuff. The meal is okay, but what we really came for is the Warp Core Breach, which is this enormous fishbowl drink with dry ice and ten shots of alcohol ('for two officers or more,' the menu says). It’s tasty, and at the halfway point we decide we’re not really feeling the booze (by the end, we’ll discover we’re so very wrong). Quark himself stops by to chat, but better still is the Klingon who comes by afterward, discovers where we’re from, mocks our flag, and leaves with the parting words, “At least you’re not French-Canadian! BWAH-HA-HA-HA-HA!”

We monorail it back to our home casino, drop off some stuff we bought, and cross the road over to: 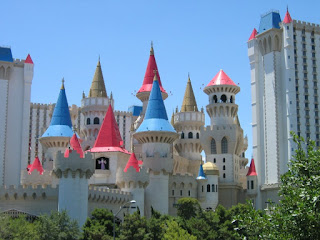 The theme: Medieval times, bitches! (though it’s pleasantly more Sherwood Forest than dark, dank dungeon).
Why do you know it: Because you own a twelve-sided die, you also know what a vorpal sword is, and you probably didn’t get much action in high school.
What’s good: It’s much less cheesy inside than out; the theme isn’t stuffed down your throat.
What’s not so good: The exterior looks terrible, there’s loads of kids, and I kept calling it Camelot no matter how many times I was corrected.

Although Excalibur is part of MGM/Mirage family of companies, we discover they won’t be switching over to the new loyalty card until the following day, so rather than sign up for a brand new card that’s only going to be good for about 12 more hours, we opt to return the following day. Instead, we go a bit father down the road to: 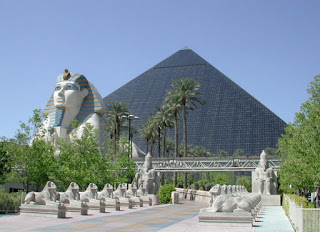 The theme: Egypt. Also: shooting space with a big ass spotlight.
Why do you know it: It’s shaped like a pyramid, and thirty-nine individual lamps fire a beam into the sky that is visible from space.
What’s good: Fast drink service, interesting theme, plenty of cheapo slots.
What’s not so good: Time share salesmen that will not take a hint and fuck off unless you literally say the words, “Take a hint and fuck off!”

We play here for a few hours while the waitresses practically throw drinks at us. We spend a lot of time playing ten-hand video poker and end up chatting with some dude from Spokane who’s pretty cool. He tells us about getting to know one of the waitresses from the previous night and asking her how much she pulled in a year. (For you enquiring minds: fifty thousand.) We finish up our poker, head back to the hotel, and have a few nightcaps (that charge surprisingly led by Sarah, and not Captain Nightcap himself). Between Quarks and the free drinks tossed our way all night, we discover we’ve had about 14 drinks a piece. Jeebus!

Anonymous said…
You probably don't want to go to Camelot anyways - it's a very silly place.
8:36 am

I like the fact that you've been to this Star Trek thing. It gives me a trump card in any nerd competitions with you (a la Homer & Marge's gambling problem)...

"I may have done such-and-such thing, but YOU went to the Star Trek Experience."

14 drinks...we though we were the only ones with a drinking problem. Have a great time. We'll talk when you get back.
12:04 pm

Beth said…
(ha ha... I wrote this comment, previewed it, then went to bed without posting it... d'oh!)

Oh ya, so worth staying up for. I loved the stab-tastic part. Seems like the kind of thing that might make a fat American have a heart attack and their litigious offspring to sue them. Either that, or the part where they make them run away from the Borg. Probably more exercise than most of them have had in the last 10 years.

And, I hate to be that annoying bitch, but did you mean ancestor rather than heir to Picard?

Oh ya, so did they ask you to tell them what part of the hand is Ann Arbor, you know, to prove that you were really from there?
3:03 pm

Anonymous said…
Apparently I need to go to Vegas! 14 drinks? And $50 grand for waitressing? I am in the wrong town, AND the wrong business.
11:04 pm

Anonymous said…
Heidi and I have spent our fair share of time in Vegas (we are part-time degenerate gamblers and got married there as well).

Our experience at Quark's is very similar except instead of Quark himself we were accosted by a misc Klingon with bad jokes.

After we put away our Warp Core Breach we found ourselves wandering the strip looking for foot long margaritas.

One of my buddies has a picture of his Photon Torpedo (some sandwich thing) in his Seven of Nine (a drink). Very classy.
9:01 pm

Dave said…
Rebecca -- And every time I called it that I wanted to sing "I have to push the pram a lot," but Sarah's never seen Holy Grail, so I'd just be singing it to myself, which is only so fun.

Jorge -- You met Michael Dorn at a STAR TREK CONVENTION. You: lose.

Beth -- You're totally right. Me no know lineage so good.

Courtney - If you do make a location/vocation change, we recommend working at Excaliber--they have the best costumes. And if you have a part-time job at a Ren-Fair, you'll only need the one outfit.

Mike - Sorry your Klingon wasn't as cool as ours. Sarah was also burped at by some completely different miscellaneous Klingon. Which was wicked.
12:20 am

Mark Hand said…
When I went there I brought home a six-pack of Romulan Ale.

Which is actually a very weak lager mixed about 50/50 with green food colouring.

(And in a strange synchronicity with this post, I offer you this: http://youtube.com/watch?v=2QSaM5gQ9vo -- also well worth it.)
5:12 pm

Dave said…
For the record we did have some Romulan Ale, which for some reason I was convinced would taste like blue freezies. WRONG.
5:41 pm