If I Can Make It There, I'll Make It Anywhere

February 05, 2007
While we intended to sleep late, the three-hour time change has us up and at ‘em just after eight. We grab some quick food at the breakfast nook downstairs, then we leave the glorious Holiday Inn and cab it over to New York, New York. It’s way too early to get the room, so we leave our bags with a muscle-y young bellhop and take a tour of the grounds. The theme of the casino is pretty brilliantly executed, though not quite as spot-on as The Venetian. Nonetheless, there’s a Coney Island inspired upstairs with an arcade, carney games, and a roller coaster that runs around and through the hotel.

After the tour, we walk south a ways and stop at a Tix4Tonight booth, where last minute cheapo show tickets are available. We decide on Le Reve for that night, and Star Trek: The Experience for the following day (call us nerds for that one, but you can’t wait to hear about it). We run back to our hotel and hit the slots, playing on our money for a while but unable to score free drinks (though it is 11:20am at the time). Lunch is at a pub called Nine Fine Irishmen. The numerous lads in question were implicated in a big old Irish rebellion in 1848. Interestingly – Thomas D’Arcy McGee, father of Confederation and Canada’s first political assassination – was one of these men. Sarah has a very nice maple-glazed salmon, and I have something with a wacky name which basically equates to a mini cheeseburger, a mini pork sandwich, and a mini smoked turkey sandwich (making me a fatty-boom-batty, and all the more welcome in this city).

By then our room is ready, and it’s a nice little crash-pad which we immediately use to crash. About an hour later, I comb the bed out of my head and we take the tram to: 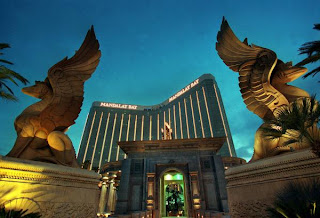 The Theme: Mandalay is an inland temple in Myanmar – it has no bay, nor does it look like Polynesia. So ???
Why do you know it: Because it’s about as far South as you can go on the Strip before it becomes a wasteland and you see the “Welcome to Las Vegas” sign.
What’s good: Loose slots, fast women (the waitress, anyhow)
What’s not so good: location – It’s the last Strip hotel and a pain in the ass to get to unless you’re staying nearby. It’s also very near the airport (Justin might like that).

We get our gamble on, get a few drinks in us, then we stop into Red Square—Mandalay Bay’s Russia-themed bar and restaurant. Outside is a giant faux-birdshit-covered statue of Lenin, sans head. (Apparently visiting Russians weren’t too fond of the monument, so modifications were made.) Inside, it’s packed solid, but we manage to snake up to the bar and order. They have a glorious vodka list, so I start off with Zyr—from Russia, and on par with the glorious bottle of Imperia that I brought back from St. Petersburg and unfortunately guzzled in about two days. Sarah has a Russian-themed martini with good flavour and a forgettable name. She starts chatting up the lady beside her, who’s from Wisconsin, and drunky-drunky. (Do you know what my favourite casino is? The one that starts with an M! You mean Mandalay Bay? Yes! The one you just said you have a room at this week? Yeah! The one we’re in RIGHT NOW? Yeah! I love that one!) We’re there long enough for me to try Tall Blonde, which is from Estonia and okay of its own accord but tastes like wormy dirt as a follow-up to the truly good stuff.

Dinner is Mexican—the Border Grill—for which Sarah had scored a wicked coupon. Dinner is delicious and the highlight is Sarah’s cucumber-infused mojito, as well as the dawning realization that we’re both a-whiff-of-alcohol shy of being loaded. Next we take the monorail to Wynn, at the other end of the strip. There’s time for a bit of gambling, and then we book it over to the theatre to see Le Reve. While not technically Cirque de Soleil (it’s created by Franco Dragone, one of the co-creaters of Cirque who left a few years ago), it might as well be Cirque. Which isn’t to say it’s bad or dull—the acrobatics, diving, music, and dancing are all top shelf—it’s just that the show is a bit one-note. It’s a lot a lot of diving, and a lot a lot of stuff on wires falling from the sky. Cirque stories are all basically the same. Average guy/girl gets drawn into a different world/enters a dream-state and slowly, after losing all inhibitions, finishes the show with wild acrobatics and possible a nice jig. The less dazzling shows, like Le Reve, give you time to dissect (and be unimpressed with) the story. While this isn’t the worst show we’ve ever seen (that honour goes to Delirium) it’s also no O—which was just amazing from start to finish. O, we miss you.

Beth said…
You had me at "muscle-y young bellhop." And then you had me again at "carney."

Wow, I must be tired... I had to read the phrase three times before I could comprehend that you didn't say, "Sarah’s cucumber-infested mojito." I should probably go to sleep, but I just have to read your next entry because I NEED to hear about "Star Trek: The Experience."
4:32 am

Anonymous said…
Again, I find that your descriptions of Vegas leave me with the desire to go. Of course, that's a little ways off from now, given life-changing events heading my way.

Dave said…
Yes, the life-changing event where you emerge from your cocoon as a beautiful butterfly. We're all waiting patiently.
12:12 am

Anonymous said…
I GOT WINGS, MOFO!

Thank you for answering my question, fugger.
3:39 pm