Update - the next day

January 08, 2006
11:23pm – The movie moves from being funny bad to just bad. Te-dious. Soon we’re all gonna break open each other’s skulls and feast on the goo inside, just for something to do.

11:37pm – Sarah goes to bed, but asks to be woken up for Fast Times at Ridgemont High.

11:43pm – Cathy retires for the evening, wishing us all good luck.

11:50pm – I mention that I’d like to have a drink, but we all agree that alcohol will only make us tired.

2:24am – We’re well into Strangelove. No one’s especially jazzed about it. Not a great choice for the 1:30 to 3:00 period. Either way, this is my second time seeing it, and once that’s done I can not have to see it again for the next 15 years or so.
Here’s the current state of everyone:
Jorge – bleary-eyed but eager to drink
Isha – clad in pajama pants but wide awake
Dave – eyes itchy, stomach burny; otherwise hanging in

3:02am – We start Henry: Portrait of a Serial Killer and we also break out the energy drinks. Isha gets Rock Star, Jorge has Monster, and I have No Fear.
All, after a toast – “This tastes like berries.”
Jorge – “Monsters shouldn’t taste like berries. They should taste like fur and blood. “
Isha – “Rock stars are supposed to taste sweaty.”

4:41am – We start Fast Times at Ridgemont High. The recapping will officially stop here. Although we all have a second wind coming on right now, my capacity for wit and insight departed somewhere yesterday. More to come from me way later today, or sometime tomorrow.


Sunday Night – Success! You mofos; you doubters; you haters; all of you who said, “You can’t do it. You’re worthless and weak.” You were wrong and now you’re gonna pay.

Me tired. Pay no mind.

The still-frustrating Donnie Darko ended at 10:00 a.m. Sunday morning. We had a quick breakfast, a high-level debrief, and then we all slipped into quick, effective comas. Then I dropped everyone off, came back, and redefined the common coma for another three hours.

In total, I was up for just over twenty-six hours, which I’m proud of. Jorge did twenty-seven, and while Isha had two quick naps of no more than forty minutes altogether, she was awake through the rest of it. I’d like to also thank the part-timers—Sarah, Cathy, Mark and Tania—who made the night a blast.

I’m very glad we did this, but I’m also happy that it’s not something I’ll have to do for another year. This whole day of wakefulness is a fun experiment, but I can do without the nausea and the dumbness that comes with it. I don’t think that I formed a comprehensible sentence between 3 a.m. and 6 a.m.

As far at the format goes, the schedule was a little punishing but I like that we saw as many movies as we did. Next year, absolutely, there will be no tedious films after midnight. Strangelove was a bad idea, Henry turned out to be more creepy then scary, and Faster Pussycat was just dumb. That part of the night will have to be packed with nightmare-inducing horror, outright action, or shit that’s just out there.

In my opinion: Deliverance, Drugstore Cowboy, Logan’s Run, and The Thin Blue Line all played very well; Barbarella, Henry, and Faster Pussycat were pretty fucking bad; and everything else played tolerably.

To close, I’d like to give special thanks to Jorge for coming all this way (if you haven’t already, check out his comments on the night), to Sarah for putting up with this thing and for making us look like good hosts, and to the Ottawa Public Library for making this night a little cheaper than it could have been. 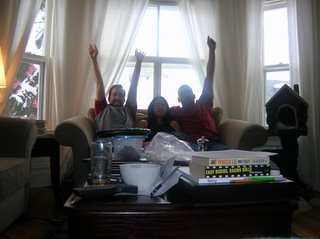 Anonymous said…
It was pretty excellent. You, Isha and I are the three musketeers of dumb ideas.

Jay said…
I think you really gave Ebert a run for his money here.
5:37 am

Anonymous said…
I like how Isha looks asleep in the victory photo.
11:17 am

Anonymous said…
Okay, it sounds like so much fun that I'm just inviting myself for next year!
12:03 pm

I admire your resolve.... I will try and stick it out to the finish next time (can't believe I missed the jag shots).

And, after much thought, Superfly was definitely my favourite movie, followed closely by Logan's Run (maybe if Logan's Run had used a 5 minute still photo montage to wrap up the whole "save the others" ending, it would have boosted it to the top- take note budding sci-fi camp screenplay-ers).
4:17 pm

Anonymous said…
Ok, seriously? If you're taking suggestions: not only do a 24 hour movie marathon again next year (which I have every intention of being at this time), but I propose a 24 hour writing marathon. You and me, Davey-boy - "wikkid hahdkore writer d00ds" - and Jorge and... I dunno... whoever else would want to show up. We meet at someone's place (I'd not go and volunteer your place on you, Dave, though I don't know what my deal will be, space-wise, at that point) and hammer out a pre-determined amount of writing. A screenplay, perhaps? A novella consisting of X pages? And we can team up on that mother and kick its ass. People can fade in and out of participation as they will (occasional naps and eating will likely happen, fer instance), then get caught up later and keep pitching in ideas and/or mad typing skillz.
There you have it.
Do with the idea what you will, though please note that whipping out the lube while staring crazy-eye hungrily at it will only diminish you in my eyes.
10:36 pm