September 05, 2005
We rise late and opt for breakfast at The Venetian, which is coffee and canoli at a little pastry shop. Then we’re back to one of the casinos that we breezed through before: 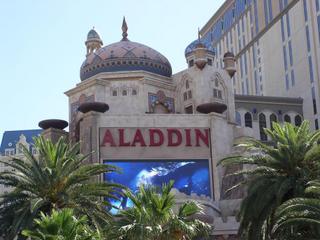 The Theme: Arabian Nights—ziggurats, giant lamps sculptures, etc.
Why you know it: If you’re a girl, because you saw that Disney movie and had a crush on that Tom Cruise-looking Aladdin; if you’re a guy, because the same movie made you wonder how good you’d look in a fez and a vest with no shirt.
What makes it good: The Commander’s Palace; the fact that my gambling luck did not run dry there. [The fact that I got SERIOUSLY hit on while playing video poker –S.]
What makes it bad: The fact that I’m an imbecile; camera thieves.

We hold of on gambling and go to the mall first. There’s a third preview studio, but it’s closed, so we kill a bit of time before heading to our reserved table at the second best restaurant in the world: the Commander’s Palace (first is Scala in Oia, on Santorini, Greece) It’s Creole-themed, and like Harrah’s, serves as a sad reminder of what’s going on in New Orleans right now. The waitstaff are extremely charismatic and the menu is just uniformly great. As if that’s not enough, they serve twenty-five cent martinis as long as you’ve ordered an entrée (limit: four per customer). We’re both thinking too bad there’s the limit but Sarah gets well buzzed by two and I have to stop after my third. Because we can, we order things that include alligator and turtle, and it’s all friggin’ good. Sarah has bread pudding souffle for dessert, during which she makes more yummy noises than a Cloones movie has ever gotten out of her [Or so he’d like to think. –S.] I have Bananas Foster, the ingredients of which include warm bananas, maple syrup, and, I’m pretty sure, crack. Without tip, the meal (let me remind you: five martinis, two appetizers, entrees, and desserts) comes to under $50. Unbelievable.

We go back to the Aladdin casino and I hop around from one tight slot to the next until landing in front of Little Green Men, on which I do very well. I catch up with Sarah, who hasn’t made anything but also hasn’t lost a great deal—then I realize that I left my digital camera at one of the machines. I know right away that it’s gone. We’re in a large casino where several hundred people are losing money by the second, no one is going to turn in something they could keep or sell as compensation. Regardless, I search and Sarah checks with security, but to no avail. I want to either cry or punch myself in the face, but neither will bring back the camera, so we just make a vow not to talk about it until we get home so that we don’t spoil the rest of the trip. Before we leave, Sarah makes some quick cash on Elephant King—not the six-hundred dollars that would even out the day, but better than another kick in the crotch.

Moseying towards MGM, we stop into Tix42Nite and score discount tickets for The Amazing Jonathan, a magician/comedian I used to see on Evening at the Improv and like venues back in the day. We zip through the MGM casino to watch more ass-biting, then we cross the street and enter: 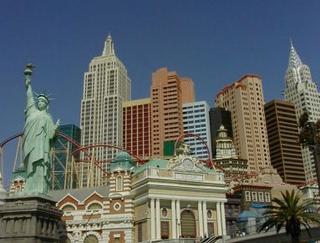 The Theme: Take a guess.
Why you know it: The exterior design is a New York City skyline, including a Statue of Liberty replica. There’s also a rollercoaster that runs through the hotel.
What makes it good: It doesn’t take itself too seriously; it has nickel poker slots where you can stretch two bucks over an hour; no one saying, “Hey badda-boom badda bing!”
What makes it bad: The distance from mid-strip; thick crowds

Sarah gets good action off a game call The Unicorn’s Horn, which is about where we realize that her luck seems to be with the animal-themed slots. I get to play a Terminator-themed slot (my wet dream if it were eight or nine years ago), and while it is fun it eats my money in a blink. Down the street, we hit a food court for some subs, and I’m amused as always that we get to take our beers along. Then we jump on the monorail so we can make the show, which is at: 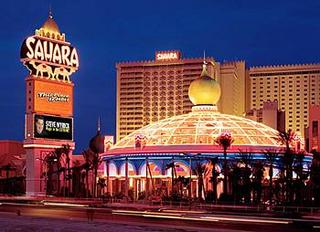 The Theme: “People loved Vegas in the seventies. I can’t imagine we’d ever need to renovate this place.”
Why you know it: It’s classic, old school Vegas (like The Stardust, The Sands, and The Flamingo.) [The Beatles stayed here on their ‘Ed Sullivan’ era US tour. –S.]
What makes it good: Not a goddamn thing.
What makes it bad: It’s empty, it’s dirty, it’s in a shitty part of the strip; It’s like you’ve just pried off the boarded-up window of the old mansion down the street that everyone on your block swears is haunted.

In line for the show, we chat with some couples from Illinois who are very nice and equally friendly. Sarah makes the mistake of telling them that our tickets were $25 each, then we discover they paid full price ($60), and suddenly there’s a distinct chill in the air. But soon enough, we’re inside and the show has started.

The show is… good. If you’ve seen The Amazing Jonathon on TV fifteen years ago, he’s basically been doing the same material ever since. He spends about the first fifteen minutes cutting up and beating up his ditzy assistant (you know, stabbing her in head with fake scissors—good times). After that, it gets quite funny, but Sarah never really shakes off that first bit. The moment the show’s over, we hot-foot it the hell out of the Sahara and back to The Mirage. Sarah makes a small profit off of Cleopatra, and I mistakenly bet way more than I mean to on video poker but end up with a four of a kind on the first hand. We run while our luck is good.

Jay said…
Oops - too bad about the camera, mate. When we go anywhere, we expect that I will lose all of our possessions, particularly the valuable ones, which really makes you wonder why we still bother to bring them, or even replace them, but yeah, don't think about it too much and you're set.
9:12 am

I didn't know there was a non-serious way to hit on people.

I will both punch you in the face and cry if you like.

I don't think I'd ever really want any action from The Unicorn's Horn. If you know what I mean.