September 04, 2005
We wake up after eleven hours of back-in-the-womb grade sleep. Breakfast, like 90% of our meals thus far, is back in TI at a place called Dishes. We’ve hit the highly coveted breakfast to lunch crossover time, where you pay for a breakfast buffet but also have access to the lunch items. I’m all out of willpower, so I have Chinese, Pizza, and a decent Creme Brule. Sarah starts off with sensible breakfast items but eventually joins me on the darkside.

Leaving TI, we begin what will turn out to be an epic walk, touring many of the casinos we haven’t hit. We start out with: 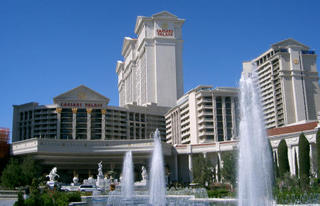 The Theme: Rome, in all its B.C. splendor.
Why you know it: Because it’s the prototypical Las Vegas casino. Also, Wrestlemania took place there. [Joey worked there on the Vegas episodes of FRIENDS. -S.]
What makes it good: It’s cheesy, but in a good way (although I didn’t have to stay there). The gambling area is unbelievably big, the lobby is filled with marble statues, and there’s a decently forged Trevvi Fountain out front.
What makes it bad: Exits can be impossible to find; their obstinate refusal to add the apostrophe to Caesar’s. [YMMV on this one, but Celine Dion's theatre is found here, too. -S.]

We basically walk through for the sake of walking through, but our main destination is farther down the strip. So our next stop—and for a similar length of time—is: 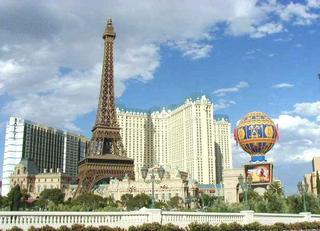 The Theme: The city of light, but claustrophobic.
Why you know it: It has a half-sized replica of the Eiffel Tower—not quite as epic as The Luxor’s pyramid (which you can see from space)—but easy to spot nonetheless.
What makes it good: The theme, with its Art Nouveau design, Arc de Triomphe tribute, and let’s not forget the tower.
What makes it bad: Bastardized French on the signs; low ceilings and lots of ‘theme pieces’ compounded by a tightly-packed casino.

We blaze through the casino and check out the shopping area next. It, too, is terribly claustrophobic, according to Sarah. As a result, we bail and walk back north to Paris’s sister property. I have no real recollection of the next resort, so I’ll let Sarah recap this one in total: 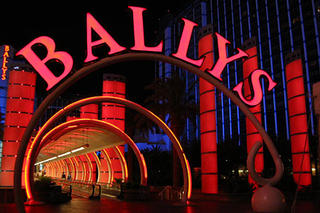 The Theme: There were neon circles at the entrance, so – neon?! Or, perhaps – 'we’re cheap and we’re mid-strip. Stay here in our smoky hotel so you’ll have more money with which to gamble'.
Why you know it: There was a massive, fatality-causing fire here in the late 1980s. As a result, all sprinkler systems on the strip were updated (and all coffee makers were removed from rooms).
What makes it good: Neon?!? The staff are also very friendly.
What makes it bad: Neon. Surly patrons as well.

This place, attached by a tunnel to Paris, is far less claustrophobic, but far more smoke-filled. We each lose a quick $10. At this point, luck not being our lady, we decide to take a break from gambling for a bit.

After walking back through Paris, we briefly stroll outside and make our way to the ‘Desert Passage Mall’ near the Aladdin hotel and casino. This shopping area boasts an indoor thunderstorm (the only rain we see while we’re there) and contains my second favourite restaurant on earth (more on both the casino and the restaurant later). In a gaming store, we peruse the themed chess boards (featuring The Simpsons, The Superfriends, and the cast of Mama Mia—okay, maybe not that one).

Next is our fourth casino of the day. While don't stay to gamble, Sarah enjoys the complex quite a bit as a result of two things (both free): 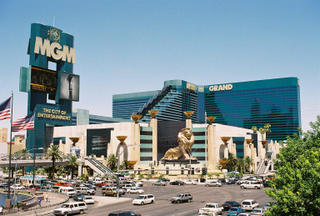 The Theme: Movies, particularly Hollywood’s golden age. And lions!
Why you know it: It’s the largest damn hotel in the world. That’s not an exaggeration, it actually is.
What makes it good: A lion habitat with animals that surprising don’t look like they been shot in the ass with tranks (aka, thing one).
What makes it bad: Money-eating slots. [It's way too big. I understand that the restaurants here are mediocre, too. -S.]

There are two lionesses in a large glassed in area, and while we’re there a trainer throws large rubber balls around for them. Again, it makes us miss our boys. The two of them alternate between playing catch and biting one another in the ass. There’s a sign that mentions “lion cub pictures—depending upon cub temperament”, but we don’t stick around long enough to see if you’re actually allowed to hold them.

We head into the MGM mall to another of the preview studios (aka, thing two), despite the sour taste of Ballroom Bootcamp that still pollutes our mouths. [This one is actually called ‘CBS studio city’, so it only previews shows on CBS, UPN, MTV and Nickelodeon. –S.] This time we’re told that we’ll be watching the pilot and second episode of an hour-long series. I decide that if it’s any kind of dance-themed show, I’ll bolt for the door even if someone’s got to die first. Fortunately, the show is really good. It’s called Threshold (and premieres on the 16th of September). I’d rather not spoil things, so the general outline is this: Carla Gugino is a specialist in worst-case scenario planning. She’s called in by the government to oversee what appears to be first contact with extraterrestrial life; her role being to control the situation and, if necessary, contain those affected by it. She’s allowed to recruit a dream team of scientific minds, which includes a mathematics expert (Robert Patrick Benedict, for all you Felicity fans), a linguist (Peter Dinklege, for all you Station Agent fans, and a biologist (Brent Spiner, for all nerds everywhere). I’ll leave the recap there. If you’re a fan of Alias or Lost [or any sci-fi series -S.], you’ll probably love this show too. Great cast (especially Peter Dinklege), with the only exception being CIA Agent/Proposed romantic interest who has all the acting prowess of Sophia Coppela. [Could I have loathed this guy more?!? -S.] Seeing as the show is going on the air two weeks from the preview, we figure that they’re testing audience reception for this guy, to see whether they should hook him up with Carla Gugino or maybe just kill him outright. Our vote: kill! kill! kill! [Word! word! word! -S.]

We have Cirque de Soleil tickets for that night so we stop by home base to change into better threads, then another warm walk over to: 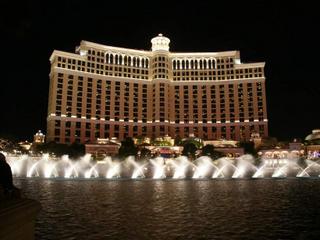 The Theme: None that I could discern—which isn’t a bad thing. [Actually, the entire complex is designed to be an opulent villa (and surrounding village) on Lake Como, in the Dolomites region of Northern Italy. The fountains out front simulate the lake. George Clooney has a home in this area, featured in Oceans 12. What symmetry… -S.]
Why you know it: “Because the house always wins. Unless one time you have the perfect hand, and that one time only, you take the house.” [How much do I love the Cloones? –S.]
What makes it good: The dancing fountains out front (could have been the beer talking, but I thought they were ‘magical’); it’s opulent without making you feel like a badly lost hobo.

What makes it bad: Throngs of tourists; awful art and decoration in parts (like the twenty foot tall paper mache American flag in the lobby beside a pair of giant animatronic bald eagle chicks. Yes, for real.)

I have what appears to be a massive allergy attack. I’m miserable to be around until Sarah makes me try Tylenol Cold & Sinus, proving that it isn’t allergies at all. The drugs fix me real good, and we head over to the show.

It’s Cirque de Soliel’s O, which we chose over the other shows because it wasn’t described as having: elements of anime, heavy audience interaction, or clowns dressed as babies or giant snails. The show is unbelievable. It has a floor that pulls away or lowers at times to reveal a stage-sized tank. There are high divers, trapeze artists, contortionists, balancing acts—and it all comes together extremely well. And the soundtrack is great, something we’d listen to at home. The whole thing could only be better if it was Cirque of the Stars and featured Gabe Kaplan or that guy who played Boner on Growing Pains.

Back at the Mirage, we have dinner at Samba—a Brazilian steakhouse. The food is very good and we share a pitcher of some drink that turns out to be heavy on the tequila, which means I get the lion’s share. We stop by the room where I have two more drinks, and we head over to Caesars right hammered. We play with our money for about an hour and a half, thus redeeming the day. Then Caesars’ design thwarts our many attempts to find an exit, and at one point I’m insisting that we can do about a five hundred metre sprint in the wrong direction of a moving sidewalk, but Sarah convinces me otherwise. [I felt like I'd started the evening with Dave and ended up with KC. -S.] We eventually find an exit, and make our way back to the Mirage and to bed.

Jay said…
"It’s Cirque de Soliel’s O, which we chose over the other shows because it wasn’t described as having: elements of anime, heavy audience interaction, or clowns dressed as babies or giant snails."

Anonymous said…
Don't quote me on this, but I think that Bally's neon is supposed to simulate a pinball machine. They did, after all, manufacture a whole lot of 'em.

Re: Bellagio: Sarah, been practicing this speech, haven't you?

8709 said…
Alot of interesting comments on this blog, I was searching for some doctor related info and some how cam across this site. I found it pretty cool, so I bookmarked. I'll really liked the second post on the front page, that got my attention.