September 03, 2005
Somehow, we’re out of bed by 8:30, so we pop over to McDonald’s for some bad-for-us breakfast. Having made a good start on the supersizing of me, we head out for the day. It’s blisteringly hot, around forty Celsius; Vegas is my first experience with a dry heat (which is pleasant at first but leaves you feeling microwaved after about ten minutes). We book it quickly down to: 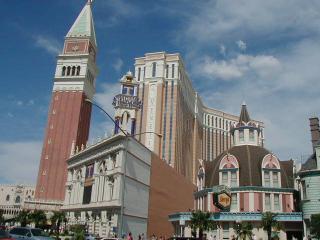 The Theme: A remarkably spot-on depiction of Venice, complete with gondolas and frescos--minus the pigeon shit.
Why you know it: You might not. It doesn’t have that level of fame or notoriety of resorts like The Luxor, Excalibur, or New York, New York.
What makes it good: It’s the best executed of the theme resorts; frankly and honestly, it’s a beautiful looking structure.
What makes it bad: Aggressive time-share salespeople in the mall; the swimming pool-blue canals are way too clean to pass for the real deal.

Sarah had heard that it's one of a few resorts that has preview studio, where you can go and volunteer as a test audience for television pilots. We track down the studio and sign up for the first viewing of the day. They sit us in a room with about ten other people, each armed with a computer and a dial. The dial goes from zero to one-hundred and we're told that we should rank the show on a moment to moment basis. Then they start the program. It’s called Ballroom Bootcamp. Oh, and we’re not allowed to leave.

Actually, it doesn’t turn out to be the torment I thought it would be, it’s just something I would never, ever choose to watch. It’s a reality show where three average women are paired up with ballroom dance instructors to train with. At the end of their ‘bootcamp’, they take place in a competition, and the overall winner gets some crappy bronze boot. Again, not awful, but not my thing, and I rate it as such. [Sadly, I am unable to comment. They had already reached the limit for viewers in my demographic group, so I don't get the spiffy free mug at the end of the viewing. -S.]

After that, we head down to the Venetian’s casino. It turns out to be our favourite place to gamble, and I’m hard pressed to say why aside from the fact that it had a great atmosphere, and the staff were friendly and quick with a drink. Sarah has crap luck, but I sit down in front a fishing themed machine called Reel ‘em In. I put in twenty bucks and play for—no lie—four hours. Sarah joins me, watching mostly but playing some, and we have around nine beer between us. All in all, a great afternoon. [I got a kick out of the casino music, here and at all the others. The soundtrack sounds like a cheesy 1980s tape that Justin and I would have put together in high school. As we strolled into the Venetian for the first time, Huey Lewis's "Do You Believe in Love" came on -- rock! It made me miss Leanne intensely, as I desperately needed to see her "I wanna love you all over" dance. -S.]

A word on booze in Vegas (again for the uninitiated). Booze is free at casinos, as long as you’re gambling. And it’s not elitist, either. Whether you’re playing Texas Hold ‘Em with five guys named Chip, or stretching ten bucks for as long as it will go on penny slots, the waitresses will serve you all the same. This I knew. What I didn’t know was that you can take your drink with you anywhere you go. You can buy a drink at a casino, walk with it across the road to Panda Express and finish it there, stroll back to your hotel room, mix up a boiler maker or a G&T, and take that back down to the casino. And there’s no last call, either. Or if there is, it happens some time after 3:30am before being renounced somewhere before 8am.

More than a little drunk, we head home to The Mirage. We take a peek at the pool, which is huge and would be inviting if it isn’t nine-thousand degrees outside. We plan to come back and spend time poolside later in the week. On the way back to the room, we pass the tiger exhibit (one of the non Roy-eating tigers we can only assume) and miss our boys. Then it’s back to the room for a quick nap and a change before dinner.

We eat at Isla, a Mexican restaurant in TI. The meal is good all over, and incidentally sobering (probably not a bad thing.) [Words cannot express my love for Mole Poblano, a wonderful Mexican dish that I adore and is available here. God bless the combination of cocoa and chilis. -S.] We gamble a bit there—where Sarah is moderately successful on a game called Leopard Spots. From there we move over to: 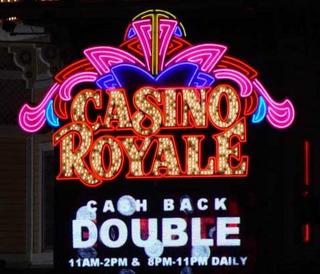 The Theme: Being to the Strip what the movie Casino Royale was to the rest of the Bond franchise.
Why you know it: You don’t.
What makes it good: Loose slots; great benefits for joining their player’s club; $1 for a Michelob at the bar [Although, if you're gambling at other resorts, you'd never have to take advantage of this - S.]
What makes it bad: It’s on par with any charity casino near you (and so, looks like dogshit compared to the other digs on the Strip).

By joining their player’s club, you get $100 practice money for table games and $50 to try on the promotional slot machine (neither have real cash value, although if you hit the jackpot on slots, you get to keep it). We blow the slot money, and hold on to the $100 vowing to get back to the tables later.

For curiosity’s sake and because it’s next door to Casino Royale, we head into: 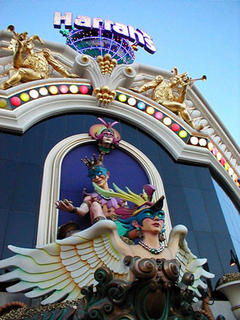 The Theme: As described: Mardi Gras! (In actuality: middle class America.)
Why you know it: Your sister came home from there once with a neck-breaking load of cheap glass beads.
What makes it good: Monorail access; and… um… beads? [It also has the catchiest theme music playing at the entrance. It just entices you to samba. -S.]
What makes it bad: General tackiness; its being home to Tobey Keith’s Kill a Raghead Bar and Grill.

Checking out Harrah’s in our last ditch effort to stay conscious, we stumble upon The Match Game slot machine. It's my Mom's favourite game show, so Sarah decides to try it out. Things go poorly. [Gene Rayburn has his way with me and doesn't call me in the morning. -S.] After dragging our asses around for a few more minutes, we realise that we aren’t the rock stars we’d like to think, so we just give up. We’re back at the hotel and out of commission by 10:30.

HMP said…
Sorry about "Ballroom Bootcamp". I don't know anyone with a good story about sitting in as a studio audience. Mine goes like this: "I didn't." After two hours (or more) of waiting in line in Hollywood to see "Just Shoot Me", Adrienne and I gave up. There was no order to the list that got you in, whatsoever. I think you had to look a certain way...kind of like getting out of New Orleans.
10:02 pm

I can't tell if it was the free cheap booze, the drugs my beau slipped into my drink, or the fact that I'm lame and physically 50 years older than my mental age. Probably the last.
11:16 pm

kris said…
Oh, and I too had some of the best Mexican of my life while I was in Vegas this year. And two of the finest margaritas . . .

Jay said…
Ooh, I love the match game too! Man, I used to looooove the gameshow network when I was sick. Maybe I should keep this to myself.

Re: minus the pigeon shit.

You rarely hear the argument against cleanliness.
8:57 am

Anonymous said…
Ah, what is venice without the pigeon shit.
And have you actually been to Venice?
9:01 am

Admin said…
Great blog, keep up the good work. Glad to see sites like this.

Here is another good site I said I would pass along.
Dish Network
Thanks
11:32 pm