September 02, 2005
I leave work at two, having phoned-in the last two hours (but as it’s the last long weekend of the summer, so has everyone around me). Once home, I ensure that Moe hasn’t taken a dump on the floor—which is a new habit he’d acquired—and then I gather the last few things I need for the trip. Sarah gets home shortly after and finishes off packing up our stuff. Then her parents arrive and Sarah’s dad helps the two of us force the cats’ chalky-smelling, semen-resembling medicine down their throats. It'd take at least three people to get it down me, too.

At the airport, we have a particularly bad dinner in a place called The Senate Chamber—the bacon in Sarah’s wrap looks fresh off a pig’s back, and my beef dip comes with a side of potato chips. We board our first plane, bound for Chicago. It’s a wee little thing and holds maybe sixty people. As we board, I get my first real peek inside a cockpit, and the digital readouts unnervingly resemble the PET computers that were a school standard in 1982, but outside of an hour delay the flight goes without incident.

Thanks to the delay, our layover in Chicago is brief. Within the hour we’re on the next plane, which is a much larger but seems far more cramped. Sarah cries through The Sisterhood of the Traveling Pants, while I read Premiere or sleep. A few hours later, 11:00pm local time, we’re in Vegas. We grab our bags, snag a cab, and arrive at: 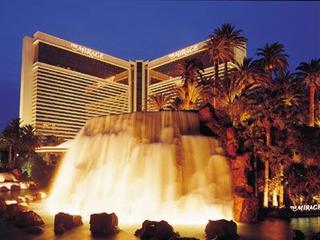 The Theme: Forested and filled with wildlife, like something you’d hallucinate after wandering in the desert. You know—one of those tree ghosties.
Why you know it: It was among the three casinos that Clooney and ten of his friends knocked over back in 2001. [This hotel was the city’s first themed mega-resort, opened by Steve Wynn in 1989. Its presence (and success) set off a building wave on the Strip, and lead to the construction of all the other cool resorts we’ll describe. –Sarah]
What makes it good: The soothing smells of vanilla and chlorine; the sixty-foot aquarium behind reception; close proximately to other great casinos; the volcano pyrotechnics show. [...not to mention the vhite tiiigahs who were made so very famous by Siegried and Roy - S.]
What makes it bad: The outdoor billboard featuring a thirty-foot Danny Gans (don’t worry, we’ll get back to it).

We check into a really nice room, just huge, with a view down the Strip. There’s time to settle in, but before the fatigue takes hold we go down to gamble. We start on slots, which we’ll continue to play exclusively throughout the trip. In particular, we play only video slots. For the uninitiated, video slots cross your traditional one-armed bandit with the features of a video game. So, in addition to winning cash for lining up the right symbols, you might get also get the opportunity to score additional credits by make flying saucers explode, or crushing The Terminator (we’ll get back to that one too). Basically, they’re good because they’re more fun than just pulling a handle, but they’re bad because they prey upon both my gambling and video game sensibilities.

Around 2:30 in the morning we go on a quest for food which, after a while, takes us down the street to: 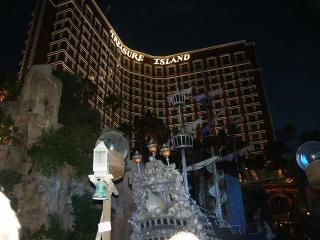 The Theme: Previously: pirates! Now: wenches! Oh, sorry—that should be sirens.
Why you know it: Because as a kid you thought, “Next time Mom and Dad go to Las Vegas, I wanna stay at the place where pirates jump on trampolines! And I also want to see the wenches!”
What makes it good: Easy access from the Mirage by free tram; the free Pirates vs. Sirens show that takes place out front several times each evening. [Cirque du Soleil's Mystere is also located there. -S.]
What makes it bad: To be hip, they changed the name from Treasure Island to T.I., when they should have just had the guts to call it T.A. [They also removed all the pirate themed stuff, other than the ship out front. It's very dull now. - S.]

We head to the 24-hour diner in T.I. and the line in ginormous. As we drift slowly into the restaurant, two girls sidle up to the three fat guys in front of us to see if they can cut in. The dialogue goes something like this:

Line Cutting Whores: Can we jump in here? We would really appreciate it. That would be so nice. If we don’t get to work in the next twenty minutes, we’ll get in big trouble.
Fat Guys: Uh yeah. Okay.
LCWs: (stepping under the ropes) Thanks.
FG: Oh, not in front of us though. Go behind us.
Other FG: Yeah. Not it front.
(The Fat Guys whisper to each other, probably discussing how they’re the smoothest talking mofos in the whole damn world.)
FG: So you girls work here?
LCW: Yeah.
FG: (sweating with excitement) What do you do?
Other LCW: We’re waitresses.
Other FG: Waitresses! (makes an aw shucks motion with his arm) Damn.
(Third FG rolls his eyes toward us, sure that he know what they really do.)

However, it turns out that the Whores aren’t actually whores, where as the Fat Guys are, in fact, just fat guys. (And justice is served when it takes the FGs about an hour to get their food. Sweet, sweet justice. Oh, and I shanked one of them with a plastic knife on the way out. That felt pretty good, too.)

Dave said…
FYI - I'm using my time machine to make it look as if I posted while I was actually there. Not sure why exactly, just something I felt like doing.
12:09 am

"...force the cats’ chalky-smelling, semen-resembling medicine down their throats. It'd take at least three people to get it down me, too..." - Only because it was chalky-smelling.

Looking forward to the next installments.
I was going to do the CSI-themed entries this week, but I just didn't have the time.

HMP said…
Dave, remind me to never compete against Sarah in a game of music trivia. NEVER.

Beth said…
Katie: Never try to compete against Sarah in ANY kind of trivia game. Ever.
2:41 pm

Jay said…
I really thought the highlight of the post was going to be Sarah crying over Pants, because that's just ridiculous to me, but then she came back and saved herself with the S&R accent.

But I must say, vanilla and chlorine do not strike me as soothing. Well, chlorine maybe, but man I hate vanilla.
8:49 am