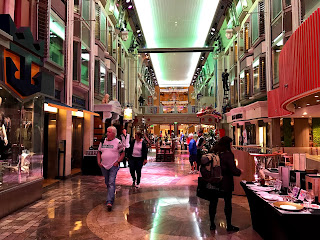 We fly into Newark on a totally pain-free flight: breezing through security and immigration, board quickly, and snooze a lot on the plane. It’s usually disconcerting when you’re travelling without the kids because you always feel sure you’ve forgotten something, or that you can’t 100% relax because you have to scan around and make sure everyone’s happy. But we ease into our solo trip pretty naturally even on the flight. It looks like a pile of yuck for everyone at Newark trying to fly out, but we waltz on out of that airport and onto a Lyft that takes us to the cruise port. Because we’re Diamond status, we get to be among the first to board, which I have to admit is a really great perk.

It’s our second trip on Royal Caribbean and our first on a Voyager class ship, the Adventure of the Seas. Key differences include the Promenade – which is a boardwalk with shops, a pub, an ice cream parlor, and other stuff; there’s also the Flowrider (a surfing simulator); a skating rink; and waterslides. Throughout the trip, the kids are fairly pissed that we are here without them, and they're totally entitled to those feelings. There’s a nice little café on the promenade where you can get food, and it’s a great alternative to the Windjammer (the always-rammed buffet.) After eating, we wander and get a layout of the ship. Then we somehow end up on the helipad for sail-away. We’d watched several VIP helipad parties on a prior cruise, and it mostly involved cold-looking people trying not to let their drinks blow overboard. Watching then, we’d smugly thought: I’d never do that. But life will eventually find you doing all the things you said you’d never do. See also: cruising in an interior cabin (which we’re doing this time around). And not to forget: cruising on one of those absolutely massive, floating island cruise ship (which we’re doing next).

My wise wife had our swimsuits in her purse, so we got changed and tried the waterslides. Then I attempted the Flowrider. Depending on time of day, sometimes it’s boogie boarding and sometimes it’s surfing. I’d intended to jump straight to surfing (with zero prior experience and knowing that I was just going to bite it over and over), but thank God it was boogie boarding first because that was hard enough. It’s easy to get on the board, and you quickly figure out how to steer while on your belly, but then they encourage you to get up on your knees, and I rolled off it about six times in a row doing that. Still fun. Hot tip: tie your bathing suit tightly. When you get pushed to the back of the Flowrider after falling, the current rolls in a way that will very firmly try to strip the clothes from your body. I managed to get through the whole experience without public nudity of any kind, so that was a win.

The main dinning menu wasn’t looking great, so we went to Chops, the specialty dining steakhouse. We both had a filet mignon, and it was a thing of beauty. I had at least two meals this trip which were so good they made me a little emotional. This was one of them.